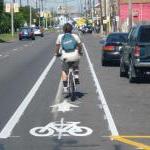 Bike lanes and new sidewalks are coming to one of the metro's most popular bike routes, the Southwest Boulevard and Merriam Lane corridor linking Northeast Johnson County; Wyandotte County/Kansas City, KS; and Downtown Kansas City, MO. Several projects in KCMO and KCK are adding bike lanes and rehabiliting sidewalks, starting in the summer of 2012. These projects realize long-held dreams to connect neighborhoods and busineses with Complete Streets across city, county, and state lines.

Phase 1: Baltimore Avenue to 27th Street – completed in  2012.
In the summer of 2012 KCMO installed sharrows between Baltimore and 25th Street, and bike lanes between 25th and 27th Street.
The City is finally beginning to implement the decade-old goal of striping bike lanes when repaving streets.

Phase 2: 27th Street to the state line – completed in 2013.
The final piece of the Boulevard in Missouri will get bike lanes when the street comes due for its regular resurfacing in 2013.

The Unified Government and communities along the corridor have envisioned an even bigger goal of creating the Green Corridor, a Complete Streets makeover that will drive redevelopment of the Rosedale and Argentine neighborhoods. The Green Corridor not only includes bike lanes, but also sidewalks, stormwater improvements, and transit.

Phase 1: Strasser Hardware to the Boulevard Drive-In – completed in 2013.
Construction of the eastern segment is scheduled to start in fall of 2012 and be completed in spring of 2013. This is the narrowest segment of the project, and the engineers at Burns and McDonnell have come up with interesting solutions to its challenges. 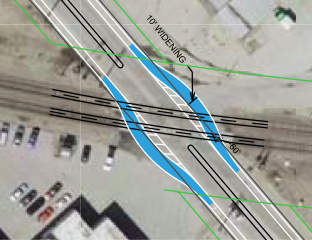 Bike lanes widen and "bump out" at the BNSF
railroad for safer riding over the tracks.

Phase 2: Boulevard Drive-In to 20th Street (Lamar Ave)
Engineering is still in progress, and construction is expected to start in 2014.

Next Steps
We are hopeful that KCK will soon move forward with a third phase, going eastward from Strasser Hardware to the state line. From there, KCMO can easily continue the bike lanes into the Crossroads and perhaps all the way to 18th and Vine. To the west, Merriam could continue the bike lanes to link up with the popular Turkey Creek Trail.  To the east