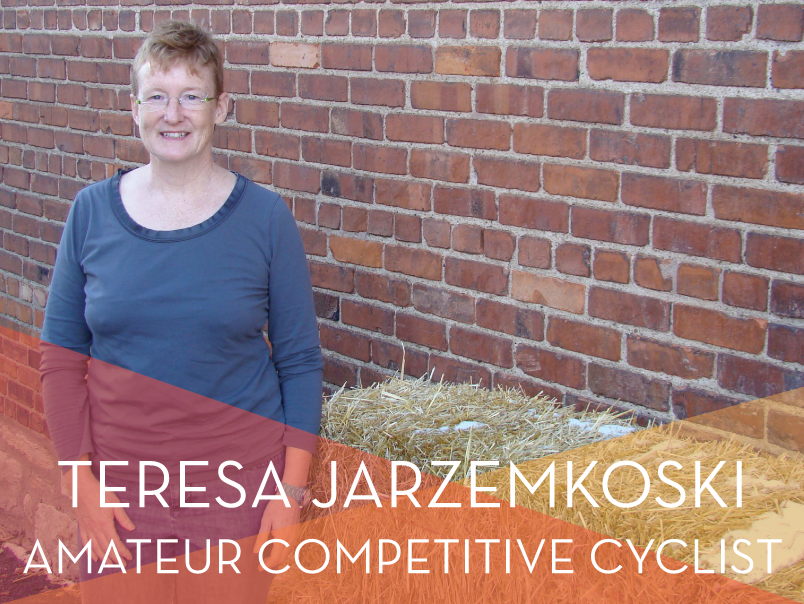 “The night before the race, we did the pre-ride and I felt like everyone was standing on their circus pony, and I was barely holding onto the reins.”

Teresa, who currently competes on the  local, regional and national level, didn’t start racing until she was in her 40s.

A few years ago, she went on a ride with a cyclist friend in North Carolina.  “I put everything on backwards. He explained to me how I should clip out and on that first ride, we came to a stop sign and I couldn’t get out. I just fell over.”

But she was hooked. She began racing in road races, time trials and cyclocross, which is her favorite type of racing. Cyclocross is a technically challenging fusion of a mountain and road biking. “There’s always something to learn, there’s always a different mix of terrain and weather and then you’ll have to pick up your bike and carry it over obstacles.”

Jarzemkoski competes against other 50 year old women, which tends to be a small field. “It’s frustrating that we don’t have as many women come out,” Jarzemkoski says. “Women tend to race in their 20s and then come back in their 40s. In their late 20s and 30s they are not racing, they’re often busy having families. It’s hard to train or race with kids. Training is time consuming and little kids are aswell. Women in general, no matter how equal a relationship, we tend to be the ones who stay home.”

To educate more women about cyclocross, Teresa started women’s cyclocross clinics in parternship with Boulevard Brewing. “If I do a clinic for women, they won’t feel like they’re going to get run over by the guys.”

Jarzemkoski says cyclocross is the most kid-like way of riding your bike. “I think cyclocross intimidates women more because it’s not the way we played on our bikes, like the guys have.”

When it comes to the obstacles of getting more women to ride, she points out the concern for safety women have. “We’re more risk averse than men are in general. So i think a lot of it is a matter of overcoming a fear of being out by yourself.”

Jarzemkoski rides her cyclocross or road bike the most often. “I’ve ridden all over the city, and probably all the suburbs and places I wouldn’t normally drive to. The East Bottoms? Who goes there for anything other than its a great ride.”

She says the biggest obstacle is dealing with people who don’t think bicyclists should be out riding on the streets. “We’re so far outnumbered where traffic doesn’t consider us traffic, they consider us a nuissance and what’s going to fix that is having more people to ride.”