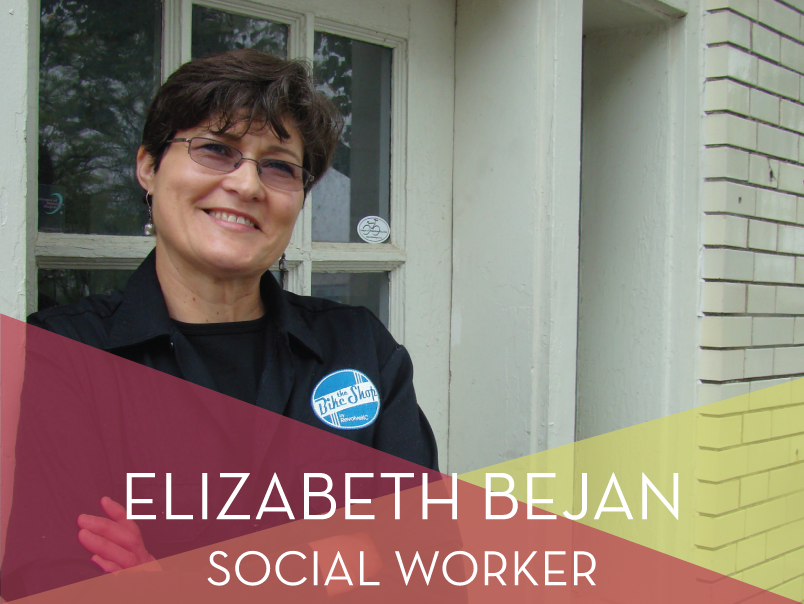 At the corner of 51st and Troost, bikes spill out of a 1930s Standard Oil service shop. Gasoline hasn’t been pumped for years. Today, it is the home of Revolve KC’s The Bike Shop. For owner Elizabeth Bejan, it’s not just about the bikes. It’s about the social service.

“I don’t know of any other social workers who do their work out of a bike shop, but I think a bike shop is the perfect place to make a difference in the community,” Bejan says.

Bejan, who grew up in a first generation Ukranian American household in KCK, worked with Hurricane Katrina evacuees before co-founding the non-profit bike shop with Family Bicycles owner Theresa Van Ackeren in 2011. “That’s part of the reason why I opened up a shop in KCK in 2011,” Bejan says. “There’s only one other bike shop in all of KCK. There’s such a need in the area, and I care about KCK. It’s my home.”

In addition to selling a wide variety of vintage bikes at the shop, Bejan also runs an Earn-A-Bike program where participants can do mechanic work to eventually get their own bike to roll away with. The bikes in the shop come from community members. She gets many bikes from recycling events throughout the metro. “I usually get about 120 bikes from Overland Park recycling events, and 50-60 from events in Lee’s Summit.”

Bejan says at least 50% of her customers are women, who walk in saying they have felt uncomfortable at other bike shops, citing incidents of being talked down to or feeling intimidated by male mechanics. “This is a place where women feel safe asking any question they might have,” Bejan says.

Bejan said the biggest obstacle for women, and KC residents in general, is a lack of access. “There’s just not enough access, espeically east of Troost–access to education and to the bikes themselves. That’s what I’m trying to do with Revolve.”

She says women are the ones who are going to be the key players in making Kansas City safer for bicyclists. “Women who bike are on the move,” Bejan says. “They are the movers and the shakers of our community. They know they’re place, and that’s out there riding on the streets making a difference.”