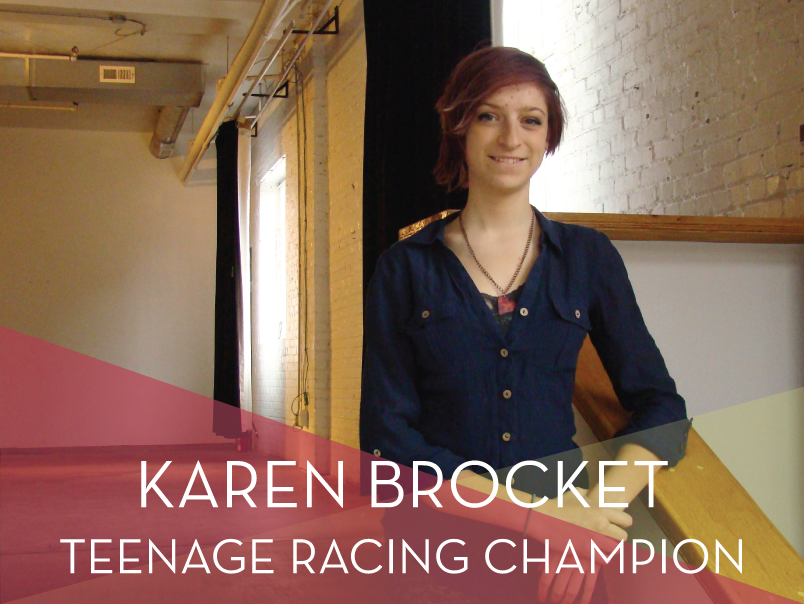 While some may think women steer away from cycling because it is too “intense” or “dangerous”, 18 year old Karen Brocket thrives off the energy.

“The main thing that kept me riding at first is the adrenaline,” says Brocket, who competes on the local, regional, national, and international level. “Mountain biking gets kind of crazy and can be intimidating, but it’s so fun. I have ADHD and sometimes I suffer from depression so it really helps me to get out and ride and get some exercise.”

Brocket started riding when she was 12 years old when her dad bought her a mountain bike. Her first experience racing was on her fifth ride. She walked up every hill. “Even though there was no competition in my division, all the people I met and all the encouragement was really neat. So I wanted to keep racing.”

Since racing, Brocket has broken five helmets, had three concussions, and broken her thumb. “I crash a lot.” Brocket races mountain bikes, cyclocross, and road cycling.  She currently races for a team based out of California called JET Cycling, an elite women’s cycling juniors-only road team. “Mountain biking and cyclocross are my favorite,” Brocket says. “Cyclocross is like a huge party, mountain bikers are really chill, and road biking is really hard–but still fun.”

A challenge that comes with being a female competitive cyclist isn’t the competition itself. It comes with the lack of other women in the field. “We need more women racing,” Brocket says. “We have about three or four that consistently show up. We end up racing with the guys because they don’t know where to put us. It would be so much better if we had more women out there racing. It would be more fun.”

Brocket graduates from high school in May and plans to go to college for nutrition and coaching so she can keep immersed in the cycling world even if she is unable to compete later. She notes that some female racers end up not going to college to pursue cycling full time. “It depends on how much money you think you can make in the cycling world,” Brocket says. “If you get an injury and you can’t compete anymore, what are you going to do?”

Brocket volunteers for Camp WIN and is on the WIN for KC Youth Advisory Board.  “We need to focus on the younger girls,”Brocket says. “Seeing the little girls’ faces and seeing how excited they are about sports is rewarding. They all look up to you and they will go home and want to try these sports.”

Brocket also works at Bike Source at 95th and Mission as a sales representative. “We get women that come in and the men working come up to them and the women don’t want to talk to them. They come to the other women working at the shop instead and we can explain to them about the clothes and the fit and the comfort level.”

When asked what her goals are, her first goal is that she wants to see more women in sports and more women on bikes. On a personal level, she just wants to see herself improve.  “I want to race at a higher level. My is goal is to go to the Olympics someday, worlds, or race as a pro contracted worldwide.”

Brocket hopes to see more women in sports and more women on bikes in the near future, but she notes there is an advantage to riding against men. It pushes her to ride faster. “Sometimes the guys are like, Oh, you’re a chick, we don’t want to race with you. We can’t let you beat us because you’re not as good.’  It pushes me mentally to be like, ‘Well, I am a girl and I’m going to do my best to beat you.’”