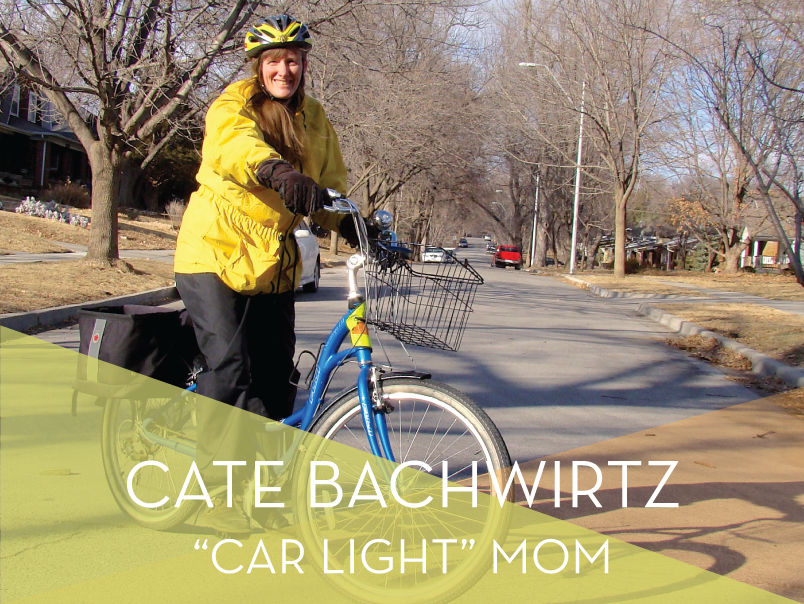 There’s a car parked outside of Cate Bachwirtz’s Brookside home. And it usually doesn’t move.

Bachwirtz,49, is a “car light” mom who prefers getting around on two wheels rather than four, and she has tried to instill that belief in her family. “When I drive I feel exhausted, but when I bike, I feel invigorated. As much as I can, I ride to get my groceries, go to the library, to events, work, the art gallery,” Bachwirtz says.

Bachwirtz still remembers the first day she learned how to ride a bike when she was five years old. “I went out to the road, looked up and there a neighbor’s bull had gotten loose out of the pen. My parents wouldn’t let me go back out on my bike.”

Bachwirtz grew up in rural Colorado, where it was usually necessary to ride in a car to get anywhere. “It was never a means of ‘Oh, go ride your bike to run this errand,’ We had to get on a state highway. Now I can use my bike for transportation, and get exercise at the same time.”

Today, Bachwirtz rides everywhere, from the grocery store to the library. “The whole car-centric thing where I came from to where I am today is so incredibly different, and I’m really glad to be less car-centric than I was. I’m happy to instill that into my boys that hopefully they will carry on.”

When her children were in elementary school, she would use a tandem to ride with her two sons. Like most parents who bike with their family, she was concerned about keeping her kids safe. Fears disappeared once they started attending the weekly Family Bicycles family ride.

“When my son Declan was 10, he found a new bike shop was opening–Family Bicycles,” Bachwirtz says. “We started going and it was just what I needed. We had originally stayed in a small area biking, but once we started doing these Family Bicycles nights, they empowered us–the new signals, the safety skills, they gave us the chutzpah to go out riding on the streets.”

Bachwirtz hopes her family gets to the point when they can eventually sell their car. Right now, they keep it as a peace-of-mind in case of emergencies. Her husband buses to work at his job downtown, and her two children are avid bus users and cyclists.

Bachwirtz thinks making biking a social activity is a good way to get more women on bicycles. “We’re pretty social already and we need to show others that you don’t need to have spandex and you don’t need to be speed cyclists. It’s about being an example and encouraging others. Biking can be a part of your lifestyle and it can be one of the happiest changes you can make.”

Even though Bachwirtz, who has lived in KC since 1982, hopes to see more dedicated bike lanes in the city, she has noticed many positive changes in the city. “Back then downtown was dying and now it’s great to see it all coming back,” Bachwirtz says. “I’m glad to be a part of it in any way I can.”

Bachwirtz hopes to keep biking for as long as possible and move to the adult tricycle when she can’t bike on two wheels anymore. She refuses to give up the biking lifestyle. “I’m glad I realized that I don’t need a car to survive,” Bachwirtz says. “It makes me feel more of who I am.”