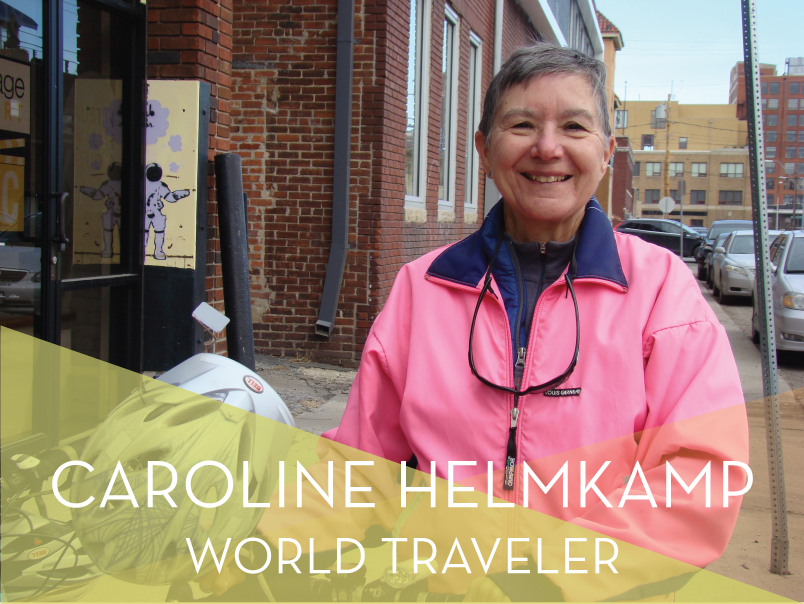 The BikeWalkKC family celebrates the life of Caroline Helmkamp. She biked all over the world and was a teacher, mentor, friend, leader, and role model for countless people at home in Kansas City. We are very lucky that some of Caroline’s life and wisdom was recorded and preserved for the future. Read on to learn more about her amazing life. She is an inspiration to all of us, and she is greatly missed.

Caroline Helmkamp has ridden her bike all around the world–from the cyclist clogged streets of Holland to the green scenic roads of the Pacific Northwest. She says there are some big differences between riding in KC versus other more cycle-centric cities.

“It’s about a 180 degree difference in biking in the Netherlands versus in Kansas City,” Helmkamp says. “There are separated lanes for bikes, for pedestrians and cars. Any adult who was driving a car was also a bike rider, so they had a good sense of what was going on around them. Here, a lot of people just don’t get it.”

Helmkamp lived in the Netherlands in the 70’s when her husband had a post-doctoral fellowship in Utretcht. She notes that biking is a huge part of family life in the Netherlands. “You would see adults riding with their kids all the time. Kids are pretty much riding bicycles in utero.”

Helmkamp, who grew up in South Bend, Indiana, has been riding her entire life. “I got my first bike when I was six years old for Christmas. Santa Claus brought it for me. I remember riding up and down the sidewalk of my house,” Helmkamp says. “I rode for fun, and when I was in junior high, I would ride to the city park to go swimming. However, in the late 50’s and 60’s, it wasn’t cool to ride your bike for transportation. I didn’t ride in college.”

Helmkamp currently owns three bikes: a Surly Long Haul Trucker she bought six years ago; a folding bike; and her mother’s custom bike her then 81-year-old mom gave to her. “My mother told me, ‘Ya know, I don’t think I should keep the bike anymore. I only rode 500 miles last year.’ But I said, ‘Mom, you’re 81 years old and you rode 500 miles. That’s 500 more miles than 99.9 percent of the other 81 year olds.’ However, there were some years my mother had ridden 5,000 miles, and it got to the point where she just didn’t enjoy it anymore because it got to be too much work.”

The first long-distance bike tour she took was a 388 mile trip in Cornwall in the United Kingdom. “The miles were painful. I found my granny gear real fast.”

But she was hooked.

Helmkamp loves using Amtrak to bring her bike along with her on trips, and she has taken her bike on trains to Boston, Milwaukee, and Washington D.C. Up next on the travel agenda is a trip from Cincinnati, Ohio to Niagara Falls this summer. Helmkamp hopes to keep touring on her bike for at least ten more years–when she’ll be 80 years old.

Helmkamp became a pro at touring over the years, but bike commuting was still a daunting task. Even though her husband would regularly bike commute from their home in Brookside to KU Medical Center, it took her fifteen years to build the courage to bike the 10 mile commute to her job as a social studies and computer applications teacher.

Helmkamp says bike commuting would make her feel empowered, but acknowledges she thinks a lot of women are fearful of riding by themselves. She holds an opposite opinion. “I feel safer riding by myself,” Helmkamp says. “You never know what moves other cyclists might make in a group.”

Even though she admits commuting by bike can be intimidating for a variety of reasons, she says she has always seen a lot of recreational female riders on the roads. She has a unique theory for why women pick up biking. “There are a lot of women in their middle years whose children and/or husbands are driving them crazy and they pick up bicycling,” Helmkamp says. “It’s a little easier than running and it’s a social activity. There are a lot of women I know who say that’s when they started riding in their lives. Biking becomes a stress reliever, something really positive in their lives.”

EDITOR’S NOTE, APRIL 2016–Caroline passed away from cancer in October of 2015. She is missed in the KC bike community.