What’s in the name Complete KC?

Kansas City’s streets are built for cars, even though thousands of of Kansas Citians rely on other modes of transportation to get around. And still many thousand more would like to walk, bike and ride the bus — they just don’t feel safe doing so.

Complete KC aims to provide a supplement to the existing BikeKC and Walkability plans with a more complete vision. We know Kansas City needs more complete streets to make it easier for people access their neighborhoods by walking and biking.

And this will not end with a book of pretty pictures — central to Complete KC is finding quick, inexpensive ways to implement the vision. Which is why we need your help.

Why a “community-driven” process?

Because you, a member of the community, are the best person to help us understand what the best solution is. You might be a cyclist who rides in River-Crown-Plaza. You might just be a resident in that area interested in how the plan will affect you. Perhaps you are a business owner who just wants to see more foot traffic into your store. Each member of the community will have something to contribute, and when we put your feedback together, we’ll get a much clearer picture of what is needed than if we just tried to design it ourselves.

Why start with the Missouri River-to-Brush Creek corridor?

The large swath of KCMO between River Market to the north and the Country Club Plaza (on Brush Creek) to the south, sometimes referred to as River-Crown-Plaza, is the densest corridor in the city. It includes everything between State Line and Paseo. It’s where so many of the city’s major institutions, attractions, companies, and residents are located. It’s also where current demand for walkable bikeable streets is highest.

We won’t end with River-Crown-Plaza; it’s just the starting point for Complete KC!

Why does the bikeway have to be “on-street”? Isn’t that dangerous?

On-street bicycles facilities — when built well — are actually the safest way for bicycles and cars to coexist.  Separating cyclists from the road makes it dangerous for them when they want to rejoin or cross a street. When a path is located away from the street, motorists might not be aware that’s it there and, more importantly, that there’s a human being traveling on it. This can make for a bad situation when their paths cross.  On-street bikeways alert motorists to the presence of cyclists. At an intersection, for instance, a motorist might see there’s a bike lane among the cross-traffic lanes. Now they know to double-check for a cyclist before they enter the intersection.  On-street bikeways also keep cyclists and pedestrians apart. In the River-Crown-Plaza corridor we’re looking at, a lot of people walk.  While it’s important for cyclists to be visible to traffic, we also don’t want them too close. That’s why it’s crucial that on-street bikeways be designed well. Bike lanes should be marked with bright paint and plastic bollards, or separated from traffic by the parking lane.

What route will Complete KC redesign?

That’s up to you! Seriously — we want to know where residents like you think the corridors should run. You travel to and from home and work on these streets everyday, so you know them best. Should the bikeway follow Broadway? What types of facilities do you want? Where should we plan for traffic calming and crosswalks? These are all questions to consider, and we want you to answer them.

What kind of infrastructure will the bikeway use? Bike lanes? Cycletracks?

Again, that’s really up to you. What would make you feel most comfortable as a cyclist and safe as a driver or pedestrian?  What we can say is that there are a lot of options to consider, and that the bikeway will probably be made up of a mix of them. Check them out here.

See above — that will depend on the feedback we get from participants like you. The reason we chose River-Crown-Plaza to start with is that it’s where so many cyclists travel on a daily basis.  Other cities doing projects like Complete KC have actually identified two or three major corridors, instead of just one. They have, for instance, north-south and east-west options. We think River-Crown-Plaza deserves a lot of attention, but if there’s enough support for other options as we move along with Complete KC, then we can look at those, too. Other corridors we’ve thought about include Northeast (Independence Ave.), Linwood, Armour, Southwest Blvd, and Brush Creek. 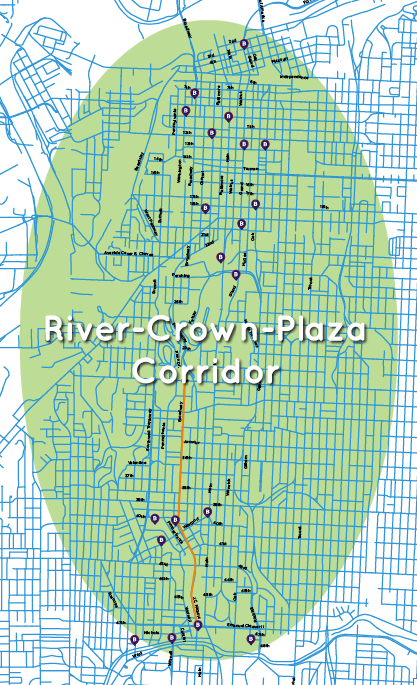