As part of our efforts to recognize World Day of Remembrance for Road Traffic Victims, we are sharing stories from the families of victims and survivors of traffic violence. This blog does contain some graphic descriptions and an image some readers may find unsettling. 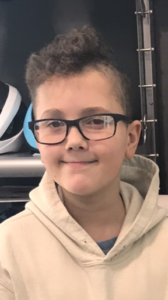 Carter before the crash

Just a month before the crash, Carter and I decided to buy bicycles, helmets, and accessories together as part of his upcoming birthday gift. We thought it would be a great way to get outside, unplug, and share the trails together. Carter rode around the bike shop parking lot many times, testing out different bikes. He finally narrowed it down and decided on one that he prized. From then on, Carter was passionate about us riding bikes together. All geared up and ready to go, he would choose the route through out neighborhood or the trail we would take. He was street savvy and always paid attention, wise beyond his years.

One day after school, he and a friend decided to ride their bikes in our neighborhood. That’s when one of my greatest fears as a mother became reality. My ten year old son was hit by a distracted driver. Carter was swiftly taken by ambulance to the pediatric hospital while I was close behind. They were stabilizing my son and preparing the ER for his arrival. The next few hours consisted of tests, scans, lab work, and consults, while I racked my brain for answers. 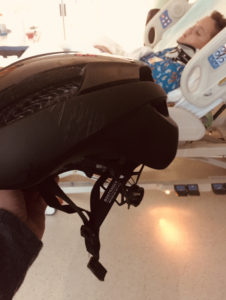 Carter in the hospital

Carter spent the next three weeks in the hospital PICU (Pediatric Intensive Care Unit), before transferring to the inpatient rehabilitation unit for further treatment of his injuries. He sustained a severe traumatic brain injury, multiple brain bleeds, a fractured skull, road rash, and deep tissue bruising on his body. He worked diligently to overcome his injuries and was then able to participate in therapies offered at the hospital. When Carter was able to perform skills set at the hospital’s baseline, he came home. For several months thereafter, he continued his therapies five days a week at a pediatric rehabilitation center. He worked on his cognition skills, physical and occupational therapies, and was finally able to add schoolwork with the help of a tutor. What once was a natural gift of learning, now became a tedious task, riddled with anxiety, fatigue, and memory loss.

At this point, as a single working mother, I had exhausted all my paid time off and family leave, and was depleting my resources. I needed to return to work and I needed help. I was fortunate enough to have my mother come out from the west coast and stay for six months. This was a huge sacrifice on her part, and she rose to the occasion. She put her own life on hold to help us. My older boys also came from out of state and took turns with the daily tasks, errands, and yard work. My community rallied around my family. They anticipated our needs, brought us food, and wrote encouraging notes to Carter. His Boy Scout troop held a walk in his honor and the Girl Scout troop even made him a blanket. The outpouring of love and support was heart felt. The unfortunate truth is that crashes don’t just happen to an individual, but the family and friends as well.

Although Carter is not cleared to participate in sports or activities now, he is able to return to school and enjoy the comradery he receives from Boy Scouts. He has hopes of achieving honor scout status in a few years. One of his strategies for obtaining this goal is to develop a bike safety program for children and adults alike. His mission is to ensure that communities have the opportunity to learn the consequences of distracted and reckless driving. We have reached out to local businesses and organizations who share his enthusiasm to join together for his cause. The support has been overwhelming thus far. Carter has also donated several Bontrager helmets to various charity auctions. We have done this with the hopes that they hear his story, and understand the importance of helmet safety at any age.

As we continue on Carter’s journey to a full recovery, we are grateful every day. We are blessed to be part of a wonderful community, thankful to our family, and friends that became family through this experience. The exceptional care he received from first responders, hospital staff, and therapists was beyond measure. Kansas City is a generous city with a huge heart for its citizens in need. The needs of others are often right in front of us and we are called into action in many different ways. We are so proud of Carter for his willingness to help others through his life-altering crash.