As part of our efforts to recognize World Day of Remembrance for Road Traffic Victims, we are sharing stories from the families of victims and survivors of traffic violence. This blog post does contain some graphic descriptions. 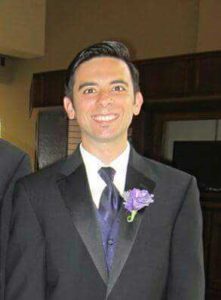 I have had the greatest opportunity that any woman could ever be given. I was given the opportunity to be the mother of one of the most loving, caring, and giving individuals that God ever created. My son, Anthony, had character that most people could only aspire to. He was capable of more love than any person I ever met.

On April 3, 2016, Anthony was riding his bicycle down Independence Avenue on his way to meet friends at the City Market to watch the Royals home opener. As he passed the Paseo, a driver, who was driving in the wrong direction while under the influence of cocaine, struck my son so hard he was thrown twenty feet into the air. When he landed, the left side of his face was destroyed, and every bone in his body was broken.

When Anthony was killed, my son Matthew reminded me of something: if Anthony had lived, he would not want anything bad to happen to the person who killed him. Anthony would not want him to go to prison. But I did want the driver to go to prison and I still do. Unfortunately, despite clear evidence of his reckless behavior behind the wheel, the driver was sentenced to 120 days in rehab.

At Anthony’s memorial, I met so many people who said that Anthony was their best friend. He had friends that he rode bikes with; friends he sang karaoke with, friends with whom he studied the Bible on Tuesday evenings. He even had terminally ill friends who he took to appointments and gathered prescriptions for. At his funeral, these friends asked me “Who is going to take care of us now?”

When that driver killed my son, he killed a part of Kansas City that can never be replaced. His death affected every part of the metropolitan area, not just Independence Avenue and Lydia. That is why it’s so important that we remember his life, and do our due diligence to make the roads safe for those taxpayers and visitors who use them, no matter what mode of transportation they choose.

In the years since Anthony was killed, I have worked hard to not only keep his memory alive, but to look for ways to make our streets safer in a way they never were for him. I’ve worked to learn more about the shortcomings in legislation and funding for people who bike and walk. I’ve spoken to keep projects in place and to advance policies that will make Kansas City safer. I’ve even joined a coalition to help push for distracted driving legislation at the state level.

As much as I can, I tell people about my son because I simply don’t want any mother to have to go through what I’ve experienced and what I continue to experience every day.

The next time you go to the River Market, take a moment to go to City Market Park. Along th 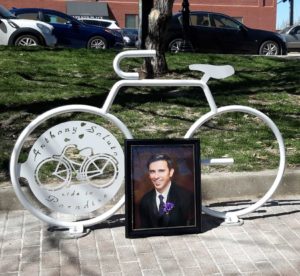 e brick path and beneath the tress, you’ll see a white bike rack with the words “Anthony Saluto – Ride in Paradise”. My family and I worked hard to get this installed because biking was something Anthony really enjoyed. At the dedication ceremony, I spoke about him, to remind people who came of what a great person he was.

When you see that memorial, I hope you’ll think of how this city lost a great person. But I hope you’ll also think of what we will continue to lose as long as our streets aren’t safe for everyone.