As part of our efforts to recognize World Day of Remembrance for Road Traffic Victims, we are sharing stories from the families of victims and survivors of traffic violence. The account below is based off of interviews with Charlene and Gloria. This blog does contain some graphic descriptions. 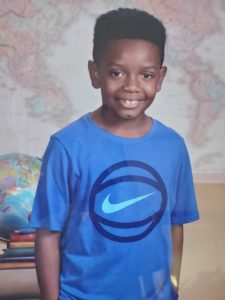 Ezrayel was a special child. He was someone who loved people and he loved to interact. Though he had a bit of a mischievous streak, he loved his brother and his cousins. He loved to call the family he couldn’t see as often, like his father, for one reason or another.

He was a boy of faith. His grandfather took him to church often, and he developed a strong bond with God early on. That love for God grew into a call for service that led him to want to help others. He had dreams of opening a shelter for the homeless in his deceased mother’s name.

He was also an energetic, outgoing child. He liked football, but loved basketball. Be it playing himself or watching his cousins (two of whom were well-respected in the local basketball scene in Bakersfield, California), he loved the sport.

We were excited. Charlene had brought Ezrayel to town for a family reunion. Gloria planned to come up from Arkansas to surprise him that Friday. She was eager to see Ezrayel for the first time in person.

While visiting a friend, Charlene let Ezrayel stay behind so he could play with some of the neighborhood kids while she went to run some errands. While the kids were playing on a sloped hill near the intersection of 23rd and Kensington, Ezrayel slipped and fell into the street, where he was struck by a driver.

Charlene got the call first. Her friend was screaming to come because Ezrayel had been hit. She immediately started calling other relatives to try to learn more or see if there was more that could be done. She got another call from her son a short time later. He said “Mom” and she knew what had happened. “Mom, I’m sorry.” She started screaming, and it was only later when she was told that Ezrayel died instantly.

She got to the intersection later, with all of her family there already. It was a terrible scene.

When she got the call around 7 p.m. that evening, Gloria started screaming as well. She saw Ezrayel for the first time that Friday, in a casket.

After the crash, both of us struggled a great deal.

Charlene had a hard time forgiving herself. She spoke to Ezrayel every day begging forgiveness. It was only after speaking with a counselor that she began to realize that it wasn’t her fault. Even still, when school started later that fall, she didn’t open the blinds until after kids had gone to school because she didn’t want to be reminded more of Ezrayel’s absence.

Gloria struggled to mend the wounds in the family. Her son, Ezrayel’s father, was incarcerated at the time of the crash, and when he came out, he was also upset. Though there was some tension between him and Charlene at first, Gloria was able to help them reconcile with one another.

Forgiveness has been difficult, but we believe it is important to move forward.

We do a number of things to remember Ezrayel, together and individually.

Together, we have worked to try to get part of the street where he was killed renamed in his honor. We have also worked with some of the leaders in the area to see if there are ways to make the street safer so that something like that doesn’t happen to someone else. The street is near a park, and kids in the area deserve to get there safely.

We also have taken steps on our own. Charlene continues to light a candle for Ezrayel and speaks with him daily. She has also organized a memorial celebration for him in Bakersfield. Gloria shared a video of him on social media. In the video, Ezrayel delivers a speech by Dr. Martin Luther King Jr. In these ways, we want to make sure our grandson is never forgotten.