Over the last couple of weeks, we have heard from a number of residents who have wanted to know what local cities will do to create additional spaces for people who walk, run, bicycle, or who have limited mobility in the midst of the COVID-19 outbreak and regional Stay-at-Home Order.

Local communities have an opportunity and an obligation to create more public space for residents because: 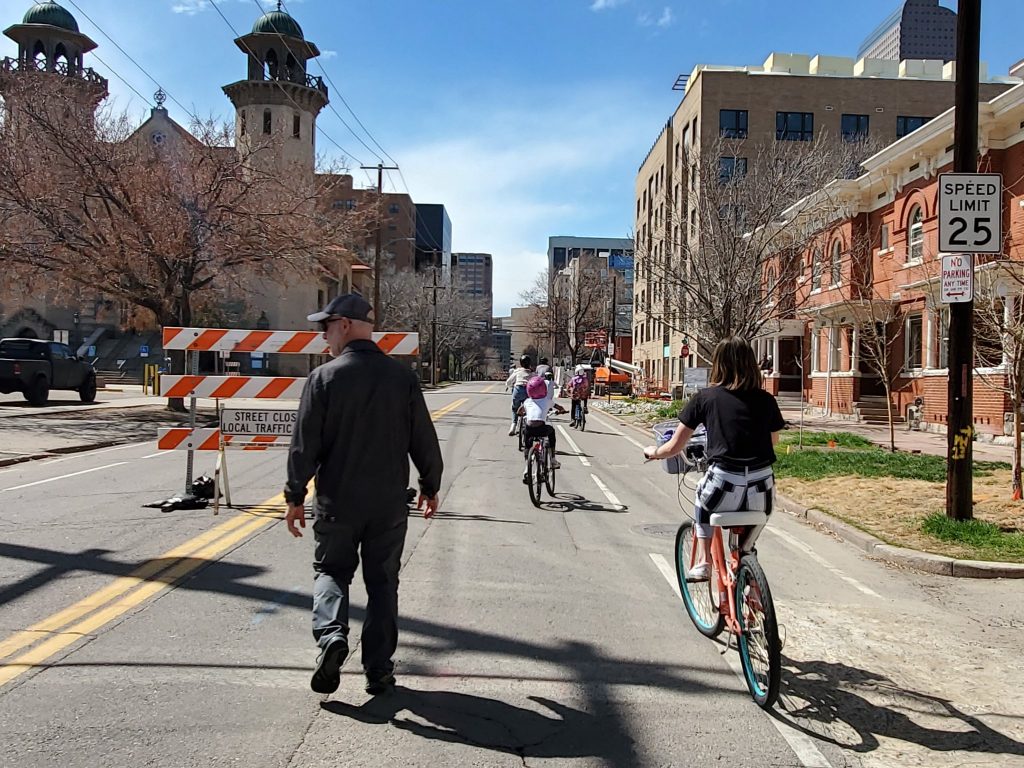 Photo from Denver by Jill Locantore.

BikeWalkKC offers this list of ideas for new public space and we urge local leaders to consider making more space for people. In the midst of the pandemic, we believe such considerations are an appropriate substitute for the sort of changes we would normally suggest for residents to pursue in our Complete KC DIY Guide.

The ideas we present below are ones we’ve discussed with various KCMO city staff as well as the KCATA to find a path forward, knowing that personnel and resources are limited in city halls across the region:

Slow Down the Cars
While traffic on our streets has dropped significantly, many of the remaining motorists are speeding and driving recklessly. Converting traffic lights to four-way stops would slow the drivers down and make it safer for everyone.

Car-Free Parks
Close roads inside parks and/or adjacent to them to expand space for people to walk, run, wheel, or bike.

Close Streets to Through Traffic
Simple barriers placed at intersections can create low traffic shared streets that keep people safe while still allowing car access to those who live or visit the block.

Pop-Up Projects
Cities could use a “pop-up” approach to temporarily implement road diet or bikeway projects already in their capital improvements pipeline that have been through a public engagement process. Not only would this give people some immediate space, it would let neighbors get some tangible experience with upcoming projects.

Connected Network
Most ambitiously, Cities could create temporary road diets along major arterials where car traffic has declined significantly. A network of road diets could create new, temporary facilities connecting key destinations, such as hospitals, grocery stores, and parks. This would be the most complicated idea to implement, but now is the time to re-imagine what our cities will look like after the crisis has passed.

BikeWalkKC has shared these ideas with KCMO city staff and elected officials. We’ve had good conversations with them in recent weeks, and now ask them to act soon to create space for people. We want this to be a guide for every community in our region that is looking for some way to allow people to engage in regular physical activity while also adhering to the physical distancing guidelines that this pandemic requires.

Contact policy@bikewalkkc.org to chat with us, and use the form below to tell your city’s Mayor and City Councilmembers to create more space for people.

Thank you for your support. Similar to many non-profits and small businesses, BikeWalkKC’s financial sustainability has been threatened by the COVID-19 outbreak. If you are able to, please consider making a donation or purchasing a membership for yourself, your household, or your organization. Any amount helps, and we appreciate your support at this difficult time.