Not canceled, but reimagined: The National Bike Summit, an annual event hosted by the League of American Bicyclists that features informative breakout sessions, great networking opportunities, congressional lobbying efforts, and more. The COVID-19 virus made an in-person conference impossible, but rather than leaving attendees to “spin their wheels,” the League found a way to make it work: the first Virtual National Bike Summit was born! Here’s a highlight of some of the activities I participated in over the past week.

The first was research done by Dr. Tiffany Mulally of Misericordia University that sought to explain why there is an ongoing gender disparity in bicycling. Two key areas include 1) the risk or the perception of risk as a deterrent for some cyclists, and 2) a number of economic factors such as labor force participation and overall economic inequality.

The second topic was about perceptions of riding among older cyclists. 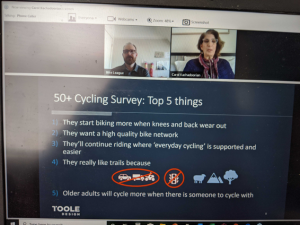 Several of the major points made by the presenter, Carol Kachadoorian of Toole Design, are points we’ve made as well here in the metro, including:

A big part of the National Bike Summit is Tuesday, when advocates trek to the Capitol to lobby for important multimodal legislation. Since we weren’t in DC this year, we called the offices of legislators representing the region in the House and the Senate.

Below is a table that breaks down what bills we discussed by chamber:

Keep an eye out for an advocacy webinar that digs deeper into these pieces of legislation!

Wednesday – Keynote on Multimodality and Movements

Wednesday afternoon featured the keynote address, delivered by Keya Chatterjee, Executive Director of the US Climate Action Network. Her introduction to biking and advocacy has led her to study and better understand how cycling advocates can be more effective in creating safer streets and what to expect on that important journey. 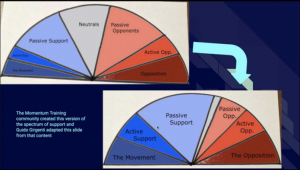 The above image demonstrates something many advocates across the country have encountered: as our respective movements grow and win over neutral individuals, it’s normal for the opposition to strengthen as well. What’s important to remember is that we can’t dwell on the opposition; we have to keep the focus on the movement.

Thursday – Plenary on the Power of People

On Thursday, we learned more about work being done by New York-area transportation advocates Danny Travis and Amy Cohen.

Danny Travis is the executive director of Transportation Alternatives, an organization that has been working to reduce cars and car infrastructure for nearly 50 years. Much of their work is around providing transportation choice, but it is all driven by a narrative arc that argues at its core that “transportation is broken for everyone.” 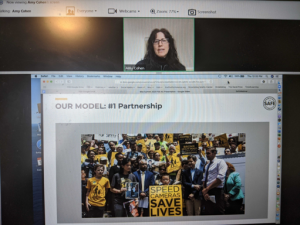 We also heard from Amy Cohen, co-founder of the group Families for Safe Streets. Amy describes herself as part of an “involuntary volunteer army” made up of those who have lost loved ones to traffic violence. For her, it was the death of her son Sammy that spurred her to action.

Families for Safe Streets successes are the result of three key elements: 1) their partnership with Transportation Alternatives, 2) the power of their collective stories, and 3) grassroots advocacy. We at BikeWalkKC have had conversations with Amy and are trying to better understand how they operate with an eye towards possibly trying to replicate that model here in Kansas City. That evaluation is ongoing.

There will be additional programming from the League as they work to cover over several weeks what would have typically been done in several days. I won’t be able to take part in all of it, but there are a few upcoming sessions I find particularly interesting:

While the League’s first virtual iteration of the National Bike Summit wasn’t quite the same experience as last year, I want to commend them for their work. It takes a great deal of time, effort, and resources to pull such a large event together. It is another thing entirely to convert much or all of that programming to an online-exclusive format.

Nevertheless, some things remained constant: the camaraderie among my fellow advocates, the urgency of our issues, and the collective vision we all share to make our communities, and this nation, a better place for biking and walking.