BikeWalkKC is excited to partner with OurStreets, a new app to crowdsource reports of dangerous driving, blocked crosswalks or bike lanes, and other street hazards that make it dangerous, difficult, or daunting to walk or bike in Greater Kansas City.

For example, if you are in a bike lane and see a parked car blocking it, you can quickly stop, snap a photo, and send a report.

All reports sent to OurStreets in the Greater Kansas City area go into a dashboard where BikeWalkKC’s planning and policy teams can get insights into what street hazards are most common and where the hotspots are located. We can use this data to focus our advocacy efforts on street safety initiatives throughout the region.

Get the App and Get Started

Download the OurStreets app for Android and iOS today.

If you can’t fill out the entire report on the spot, it’s OK! Just take a photo so the time and location gets recorded. Then at a later time you can fill in all the details submit the report.

Some common hazards you can report include:

OurStreets is similar to the 311 Action Centers in several metro cities, but with some key differences. OurStreets is great for temporary problems like dangerous driving or parking in a crosswalk or bike lane. These types of hazards are often gone by the time City Hall can process a report and dispatch an inspector to the street. 311 is best for persistent infrastructure problems that require a city crew to repair – like faded crosswalk paint or potholes in a bike lane.

OurStreets does not collect any private information like your name or email address. It does use the metadata from the photos you upload to identify that exact location of the problem but does not track that data to your personal device/account. You do not need to sign up for an account or provide any personal data to use the app.

Most action centers can be reached by calling 311 within city limits. Alternate numbers are available if you are calling from outside city limits or if your cell phone connects to a tower in a different city. Some cities also take 311 requests via online forms, Twitter, or other options.

Download the OurStreets app for Android and iOS today. OurStreets is also selling their merch (t-shirts, hoodies, and tanks) with 100% of proceeds going to advocacy partners like BikeWalkKC! 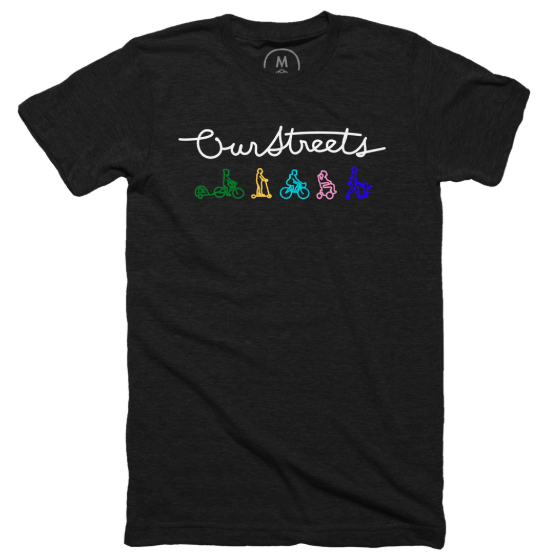