As we approach the one year anniversary of Kansas City’s first protected bike lanes on Armour Boulevard in KCMO, data from Public Works and the KCPD shows that traffic crashes are down, bike traffic is up, and car traffic is calmer. City Hall is also making some tweaks to the design in response to concerns about visibility at intersections for motorists. This data and the City’s willingness to make iterative improvements will help ensure lessons learned on Armour are used in the new bike plan and future bike lane projects throughout the city.

What the data says

KC Public Works and Police Departments have been gathering data for the past year, and they report some significant improvements.

The increase from 7 to 44 people on bikes might not seem like much, but it’s still early days and Armour is a short corridor that does not yet connect to any other bike lanes or trails. Upcoming projects like Charlotte/Holmes and The Paseo will start to create a network out of isolated pieces of infrastructure.

This decrease is consistent with data from a recent study showing that separated bike lanes reduce crashes and fatalities for all people on streets – including those in cars.

Motorists are driving slower on Armour, which was a primary goal for the three neighborhood associations that initiated the Armour Complete Streets project. After finding most cars are going 28 mph, the City is lowering the speed limit from 35 to 30 miles per hour.

Improving on the design

Some neighborhood residents and motorists who drive through the neighborhood have expressed concerns that visibility is poor when crossing Armour on intersecting streets. The original design maximized the amount of car parking on the street, another concern for residents in the surrounding neighborhoods.

In response to those concerns, the city is testing a new design at the intersection of Armour and Kenwood. Car parking is being moved back further away from the intersection to improve visibility, and vertical posts are being installed to help keep cars from parking in the correct spots.

We are encouraged by the evidence showing tangible safety improvements and City Hall’s willingness to make improvements to the original design based on lessons learned and neighborhood feedback. Public Works will assess these changes in 4-6 weeks and then decide on further improvements to the rest of the intersections on the corridor. If you have feedback about this pilot test, send it to maggie.green@kcmo.org. 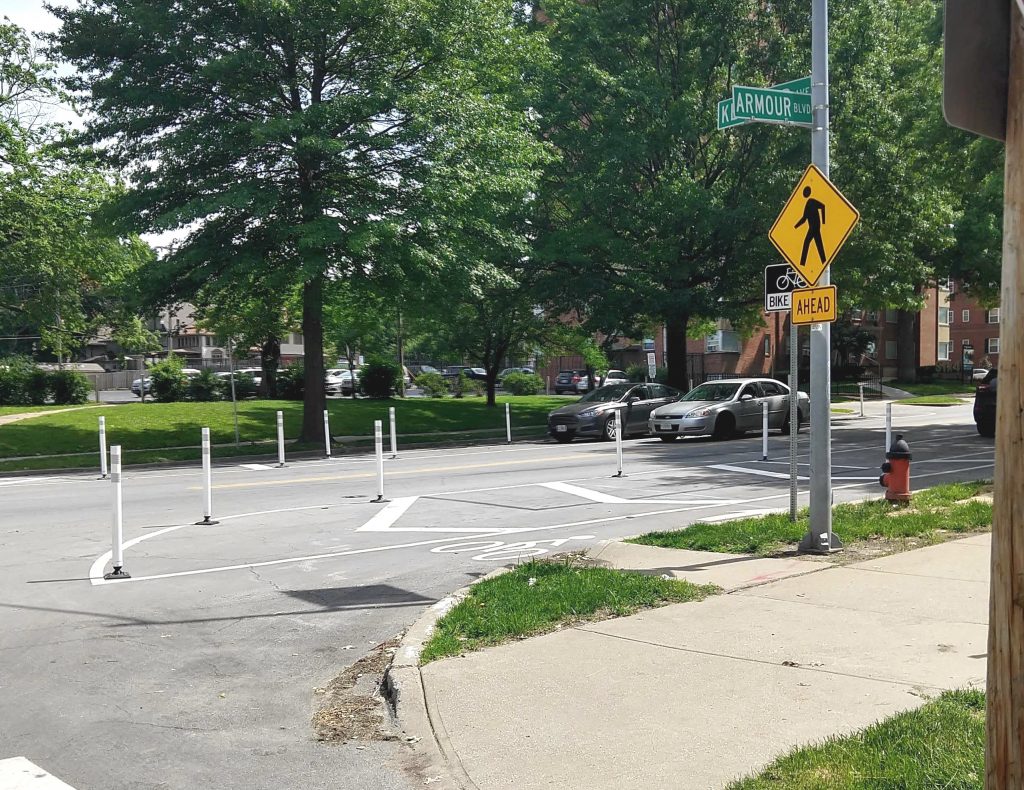 Car parking is moved further from the intersection to improve visibility when crossing
Armour. 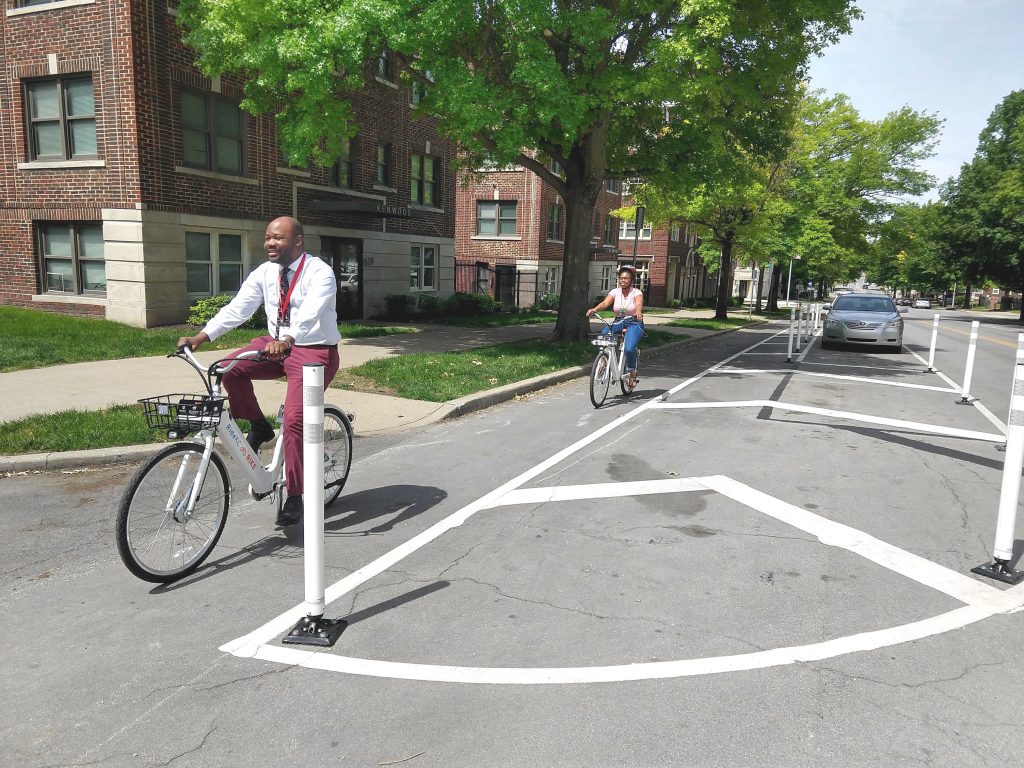 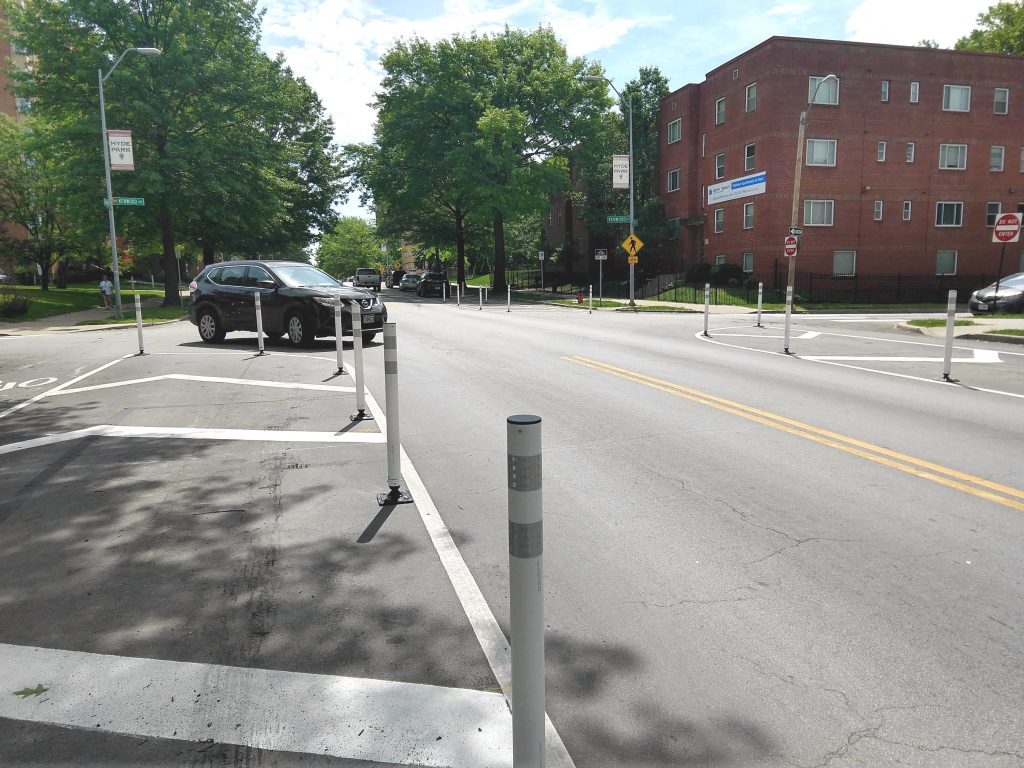 Moving parking further from the intersection makes it easier for cars crossing or turning to see oncoming traffic. 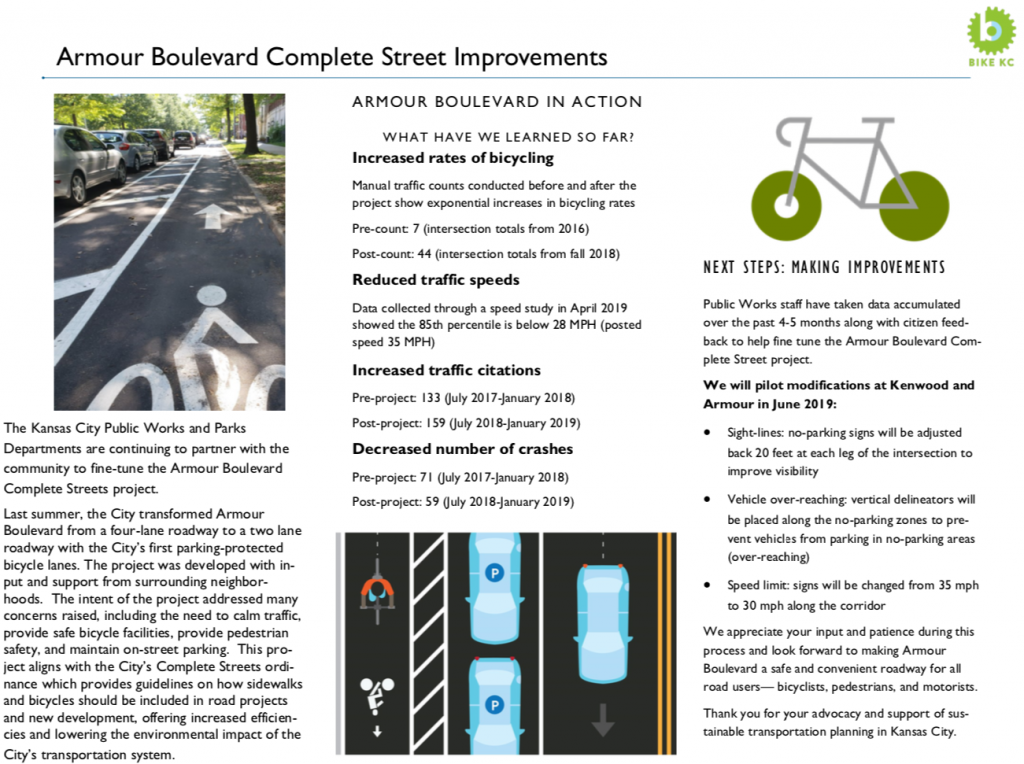 Updates from City of KCMO.

The project started with a desire by the neighborhoods along Armour to slow down car traffic and make it safer and more comfortable to cross the streets — especially for students and parents at the five schools along the corridor.

Between 2015 and 2017, BikeWalkKC convened a steering committee with the Squier Park, Hyde Park, and Old Hyde Park Neighborhood Associations. Several departments at City Hall were represented, plus the office of 4th District Councilmember Jolie Justus.

The project was completed in July 2018 with a ribbon cutting and inaugural bike ride that included City Councilmembers, neighborhood leaders, local schools, and Midtown residents.