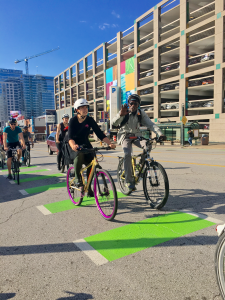 This is the last Feel Good Friday where we’ll be discussing the KCMO Bike Plan. Read on to learn more!

The City of KCMO is considering adoption of an update to the Ride KC Bike Master Plan. There’s a lot of information in this new plan, but what does it all mean?

Before we jump in, we want to give you an update of where the plan is in the legislative process:

In the final part of the series (don’t worry; we won’t split it in two), we’ll examine the final three chapters of the bike plan (there are seven in all).

Chapter Five discusses how the network outlined in the plan will be implemented. Because full implementation will take years to complete, the Bike Plan identifies strategies and action steps for proactive implementation over the next five years.

The plan envisions accomplishing this task with a number of tactics, including:

Some elements of this system, as identified by the bike plan, include:

Chapter Seven finishes the plan by identifying measures of success. The network and the supporting apparatus are important, but is also imperative that we have some way of determining whether we’re really making progress. To that end, the final chapter notes that the City must ensure the bicycle program is managed and modified with the insight of performance targets and trends over time.

To that end, the chapter lays out what some of these indicators for progress should be, such as:

The bike plan is an ambitious attempt to dramatically shift how people in Kansas City move from one place to another. While the plan is specifically geared towards bikes (no pun intended), the implications reach far beyond the transportation realm, touching everything from health to safety, to economic development, equity, and the environment.

If you haven’t already, please sign the petition in support of the bike plan! You can also learn more about the bike plan by visiting the page on the City of KCMO’s website.

Did you know? BikeWalkKC’s advocacy efforts are member-supported! You can lend your voice to our work by becoming a member today. And get the latest on bicycle- and pedestrian-related happenings when you subscribe to our newsletter!