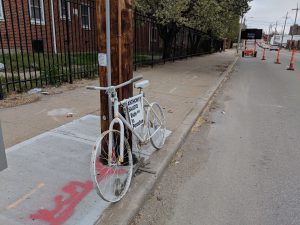 The Ghost Bike for Anthony Saluto

In the days following a tragic incident near the intersection of Tracy and Independence in the Historic Northeast, a stark, silent testament to the consequences of our city’s emphasis on traffic efficiency at the expense of human lives was assembled. The “ghost bike” – a bicycle painted in all white – for 32-year-old Anthony Saluto rested along a utility pole near the spot where his life was tragically cut short on Sunday, April 3, 2016.

On that day, Anthony was riding his bike westbound on Independence Avenue when a driver heading eastbound veered across the yellow line, striking and killing Anthony. The car used by the driver was located by police one block away on Lydia Avenue.

That driver, 31-year-old Joseph Lasala, made several critical mistakes before, during, and after the crash occurred. Beforehand, Lasala took a number of drugs that inhibited his ability to drive safely; two separate labs conducted afterwards show he had benzodiazepine, cocaine, opiates, and other illegal substances in his system. When he struck Anthony, investigators estimate that Lasala was driving between 47 and 58 miles per hour on a section of Independence Avenue where the speed limit is 35 miles per hour. After the crash, as Anthony lay dying in the street, Lasala didn’t stay behind and try to help. He fled the scene.

It has been over two years since Anthony Saluto’s death and his family is still waiting for Joseph Lasala to be held responsible for what he did. They were about to go through the process of the trial itself when they learned of an unfortunate development: Joseph Lasala was accepting a plea deal. As Howard Wilkens, Anthony’s uncle, revealed, the deal will allow for Lasala to serve just 120 days incarceration and five years probation. It was also agreed that he could request for the probation to be served out of state since he is not a resident of Missouri. In addition, prosecutors agreed to drop the charge of fleeing the scene, which would have counted as a felony under the circumstances of the case.

BikeWalkKC firmly believes that this sentence is inadequate and will do little to nothing to comfort the family of Anthony Saluto or deter these types of crimes in the future. Even though this sentence is likely to be the one delivered by the judge, the cycling community deserves to have its voice heard in this important case. To that end, in addition to this blog, BikeWalkKC will be delivering an impact statement at the sentencing hearing for Lasala.

Beyond the individual merits of this case, the death of Anthony Saluto along Independence Avenue demonstrates that as a city, we are failing to protect those who choose to walk or bike instead of driving a car. It is not enough to push for a stronger punishment for Lasala; we must endeavor to prevent such a crime from ever unfolding on our streets again. Given the recent streak of pedestrian injuries and fatalities in July, something has to change. That is why, in addition to our work on Anthony’s case, we will be pursuing the following policy changes as well:

Initially, protected bike lanes could have saved the life of Anthony Saluto. Protected bike lanes, as opposed to conventional bike lanes, include some sort of physical separation between cyclists and motorists. They have been shown to not only make cyclists feel safer, but also decrease the amount of crashes involving cars and bicycles. The City of KCMO recently implemented a Complete Streets renovation of Armour Boulevard, which includes parking-protected bike lanes from Broadway to The Paseo, the first of their kind on our streets. More are being planned on some of our other major thoroughfares, including a two-way cycletrack along the Paseo near Independence Avenue. We will advocate for a portion of that project to be extended to the section of Independence Avenue where Anthony died.

Second, we will push for the City Council to enact a Vulnerable Road User (VRU) ordinance. These policies are designed to protect cyclists and pedestrians from being harmed by cars or trucks. They achieve this by explicitly defining what a VRU is, how an individual who is operating a motor vehicle should behave when they are near a VRU, and what the penalties are for harassing, threatening, injuring, or killing a VRU. These laws are already on the books in cities and states across the nation. In fact, their numbers will swell by at least one more later this year when North Kansas City will enact such legislation. There is no reason that KCMO, with the largest street network in the metro, should not have a similar law.

Finally, we will begin to explore ways for the City to adopt a Vision Zero policy. Vision Zero is a comprehensive policy that strives to eliminate all traffic fatalities and serious injuries, while increasing safe, healthy, equitable mobility for all. The policy can be seen as a wider, more preventative application of the vulnerable road user ordinance. Like the VRU ordinance, there are a number of other places across the nation and in the State of Missouri that can inform our efforts. 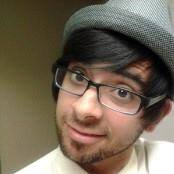 We undertake all of these actions with the understanding that none of it will bring Anthony back. The hole that was left within his family, among his friends, and the Kansas City cycling community is something that we will all have to live with forever. But the need for our voices to be heard and to protect vulnerable road users has taken on an added significance since Anthony’s death, particularly with the death of several pedestrians, including Haley Elizabeth Hackett. We owe it to these victims and their families to advocate for a safer transportation system which ensures that no person ever has to go through so horrific an experience again.

The ghost bike on Independence Avenue carried a small sign which read “Anthony Saluto: Ride in Paradise“. The place where his life was taken by the careless antics of a driver remains anything but paradise for vulnerable road users. We owe it to Anthony and the other cyclists who have been injured or killed on our streets to push for safer places for them to ride and tougher penalties for motorists who put everyone in danger.