While BikeWalkKC spends a good amount of time addressing issues related to active transportation (specifically biking and walking), we understand that a true multimodal system of transportation is what will benefit the Kansas City region today and in the future. In addition to biking and walking, we also support efforts to increase access to transit options. To strengthen our ability to advocate for that mode as well as active transportation options, I recently attended a workshop entitled “Advocating for Transit in Red States” hosted by TransitCenter.

The workshop took place in Nashville, Tennessee, which was recently the site of a failed transit referendum that would have raised $5.4 billion for a new transit plan which included improved bus service, new light rail lines, and a new transit station in the heart of the downtown area. The struggle to pass this measure served as a powerful reminder of why all of those in attendance needed to learn more. 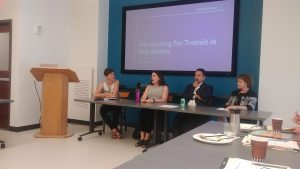 A panel discussion on the push for Nashville’s transit referendum.

The first day of the conference focused on the work that advocates have done to push for transit improvements in their respective regions, to varying degrees of success. We spent the morning hearing from proponents of the failed transit referendum and explored what caused so promising a campaign to ultimately come up short.

In the afternoon, we heard presentations from two organizations that had successfully pushed for transit referendums of their own: WakeUP Wake County in the Research Triangle region of North Carolina and the Indianapolis Chamber of Commerce. In addition, we learned about some of the transit advocacy tools and tactics employed by organizations from New Orleans, Miami, New York City and elsewhere.

The second day of the conference delved into how transit advocates can work more effectively with elected officials. The first presenter, from the Northern Virginia Transportation Commission, discussed how her organization worked to secure more than $150 million worth of funding for transit priorities through swift action and tailored messaging that spoke to the needs of lawmakers in the state legislature. 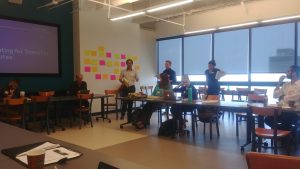 Facilitators from TransitCenter explain observations from the breakout session.

In the afternoon, we broke into groups to discuss some of the main issues we identified that hinder our ability to effectively advocate for stronger multimodal transportation. In the three groups that I was able to rotate into and out of, we discussed ways to engage bus riders around their issues, moving a good idea from the planning stage to action, and potential solutions to gentrification near transit.

I gained a number of important insights during my time in Nashville:

Make the push where you know you can win. What appeared to be a common refrain, particularly with the presenters from North Carolina and Indianapolis, was that it is perfectly reasonable to divide your campaign area in a way that most benefits your campaign. Both presenters spoke about how they had the option to attempt a broader vote that would have yielded more benefits for more people. Yet they realized that narrowing their geographic scope would ultimately benefit the outcome of their campaign, enabling them to better prepare for future referendums and challenges in more difficult territory.

Understand what works for your city. Erin Hafkenschiel, from the Office of Nashville’s Mayor David Briley, explained that while the referendum campaign was hindered by the previous mayor’s emphatic support, any future referendum in Nashville would likely require a similar level of support from the current mayor because of how much power the mayor has in the city’s government. While this isn’t the case in Kansas City, it highlights the importance of understanding what, and more specifically who, should be at the forefront of an advocacy push. 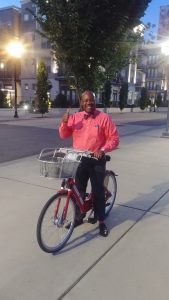 What multimodal conference would be complete without a ride on bike share?

Be fluid in a flexible environment. A universal truth that came out of these campaigns, whether they be in support of a referendum or opposing a change to existing policy, is that you must be ready to adapt to changes in the environment. It meant altering the approach for a new mayor in New Orleans. It meant shifting attention from local fare hikes to the state budget in Cleveland. But it also meant choosing what projects deserved attention and which ones didn’t in Miami.

All of this and more will inform and enhance the work we do to improve the quality of, funding for, and access to reliable forms of multimodal transportation here in the region. The workshop was fun and informative, but it also reminded me that transit advocacy is definitely a reason to #FeelGoodFriday.