You may have spied something new in the green paint going down on Armour Boulevard in KCMO: a green box at some intersections, adjacent to the bike lanes and in front of automobile traffic and the crosswalks. These “queue boxes” or “two-stage left turn” boxes offer cyclists a safe way make left turns from a right-side bike lane. 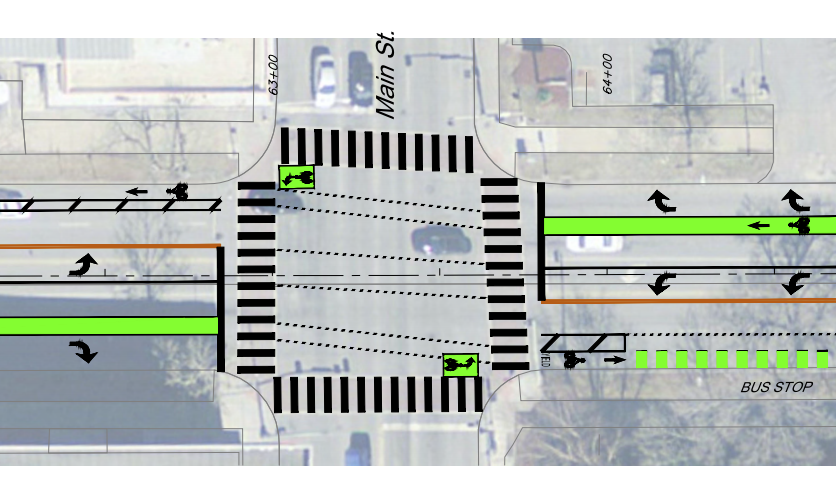 Two-stage bike boxes provide a place for the cyclist to move away from car traffic, avoiding conflicts at the intersection and speeding up the flow of traffic, until it is safe and clear for the cyclist to complete their turn. Bikes reposition in the queue box, facing the desired direction, and then wait until traffic is cleared to proceed. Drivers should not park or stop in the queue box.

The bike boxes have been implemented to provide cyclists with a safe way to make left turns at intersections. This avoids cyclists having to cross lanes of traffic to get into the left turn lane.

How are they to be used?

Cyclists: position yourself and your bicycle to the right side of the bike box, leaving room for other cyclists. When it is safe to cross or, at a signaled intersection, when the light turns green, ride straight through the intersection in the traffic lane (not the crosswalk). If there is more than one cyclist in the bike box, the cyclist to the right should proceed first.

Motorists: when making a right turn, watch for cyclists in the bike boxes, and yield to them as they exit the bike box before completing your turn. If going straight, only pass cyclists when it is safe to do so – it only takes a few moments.

As always, we encourage motorists and cyclists to drive and ride with care, respect, and courtesy.

Check out this video from our friends in Seattle about navigating two-stage bike boxes:

Where are the bike boxes on Armour?

There are currently five bike box locations on Armour, at the intersections of: