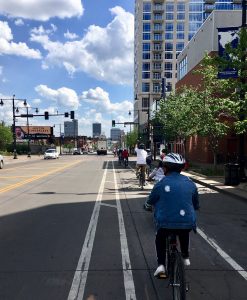 An after-school program founded by BikeWalkKC and a math teacher, East High School Bike Club has counted victory after victory in students’ personal lives as well as in their city. During the Spring 2016 pilot program, 26 students learned basic bike maintenance and safe bike-handling skills, and earned their own bicycles. The students also created bicycle route maps as part of a math assignment, and several noted the lack of bicycle infrastructure in their neighborhoods. Fully 80% of the students were new Americans, and many had never ridden a bicycle before completing the 8-week course. The students were determined, however, and all 26 graduated the program. The pilot was a success! 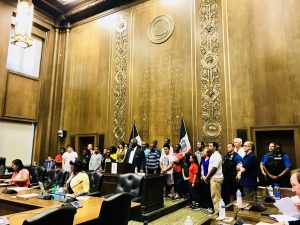 Since that initial cohort, East High School Bike Club students have achieved new heights and over 100 students have participated. They still practice bike maintenance and confident riding, but they are also digging deeper into bicycle advocacy. They have invited numerous local influencers to experience life on a bike: Councilmember Jermaine Reed (3rd district) rode with the students and later spoke in favor of investment in biking and walking infrastructure. KCMO city planners Joe Blankenship and Kyle Elliot, and KCPS Board Members Pattie Mansur and Matt Oates have also joined in the fun. In 2017, the Bike Club received the Bike Month Proclamation at City Hall for the first time. 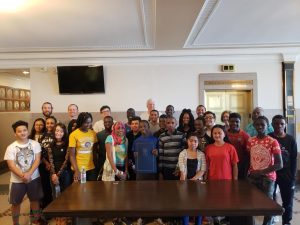 EHS Bike Club students were all smiles after riding their bikes to KCMO City Hall to accept the 2018 Bike Month proclamation.

At this year’s visit to City Hall, Mayor Sly James presented the students with the Bike Month Proclamation, thanking students for their participation, and the Council and City staff for their dedication to making Kansas City more bike friendly. Maggie Priesmeyer Green, BikeWalkKC Director of Programs, has seen the East High School Bike Club grow from a possibility to a sustainable, effective reality: “It’s really incredible that what started as a small idea has grown to a sustainable and replicable program, impacting students’ lives in our most diverse communities. It’s also exciting to be able to share experiences with these students like visiting City Hall, meeting the Mayor and City Council, and most of all, riding bikes on newly constructed bicycle facilities! We look forward to continue seeking opportunities to weave our education programs with advocacy and outreach with city staff and elected officials around the region.”

In a recent development, the Bike Club has garnered the attention of two special champions who have pledged to fund a biking/hiking trail in a forested area of school property. This trail will offer new opportunities for students to experience mountain biking right in their neighborhood, further expanding the students’ bicycle skill sets. Stay tuned for more details! 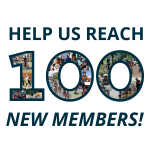 We are so proud of our Bike Club students at East High School. These young people are learning to speak out for their communities, and they are building character that will carry them through adulthood. The East High School Bike Club is made possible by school staff and district champions, MoDot, the Menorah Heritage Foundation, the William J. Brace Charitable Trust, Overland Park REI, the Edward G. and Kathryn E. Mader Foundation, leaders, and YOU: Help grow the next generation of active transportation advocates by becoming a BikeWalkKC member today!