Businesses and organizations throughout Greater Kansas City showered bike commuters with all manner of baked goods this week in celebration of Bike to Work Day.

Family Bicycles in Waldo set up a snack bar right on the Trolley Track Trail! 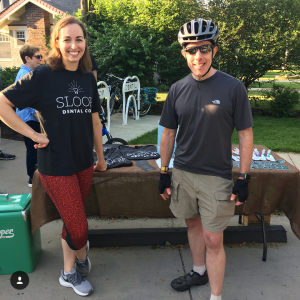 Downtown KCMO got in the action with stops at Lathrope and Gage, the MidAmerica Regional Council, and Head for the Cure at Wonderhub. BikeWalkKC and KCMO Public Works talked bike lanes and Complete Streets in Midtown. Family Bicycles in Waldo and Sloop Dental in Brookside treated Trolley-Track-Trail-Corridor commuters. The Rosedale Development Association in KCK celebrated with bagels up and down Southwest Boulevard, and the City of Overland Park hosted a bike-to-breakfast at City Hall as the finale to a whole week of special bike-to-work events! 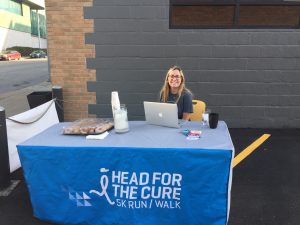 Head for the Cure represented the Crossroads District. 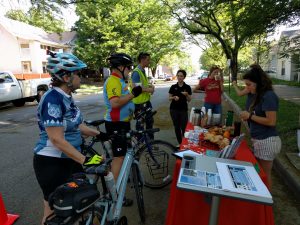 According to the League of American Bicyclists, the number of bike commuters in the US grew by 62% between 2010-2013. As bicycle infrastructure improves, and ridership reaches critical mass, bicycling for transportation will become comfortable, feasible, and convenient for even more people. If you would like to try bicycle commuting, but are unsure how to get started, check out our Confident City Cycling classes!