Suddenly, and with virtually no debate, the Missouri Senate passed SB 617 last Wednesday, a sweeping tax reform bill which includes a provision that will raise the state’s fuel tax gradually from 17 cents per gallon to 23 cents over the course of three years.

SB 617 would increase the state’s excise tax on fuel by six cents per gallon — raising the total to 23 cents. This would be on top of the federal fuel tax of 18.4 cents per gallon of gas and 24.4 cents for diesel.

The house  passed a similar tax reform bill, HB 2540, today. This version does not include the fuel tax increase but it does include some vehicle registration fee hikes.

As the two bills are reconciled, we will see if fuel tax increase survives.

This move from the state legislature follows the January release of the 21st Century Missouri Transportation Task Force report, which recommended a 10 cent per gallon fuel tax increase. This is the second time in five years that a Missouri special task force has concluded that a tax increase is necessary to pay for the state’s massive highway system.

You may recall in 2014 that Missouri voters defeated a measure that would have imposed a temporary increase of three quarters of a cent on the state’s base sales tax rate to fund transportation. Voters rightfully rejected the measure that would have substantially increased the sales tax burden on urban residents in order to pay for the expansive rural highway system.

At this point we urge Missouri lawmakers and voters to proceed with caution (the fuel tax increase may ultimately require a public vote). We believe that Missouri residents, particularly those in large towns and cities, may not benefit from these proposals. Here’s why: 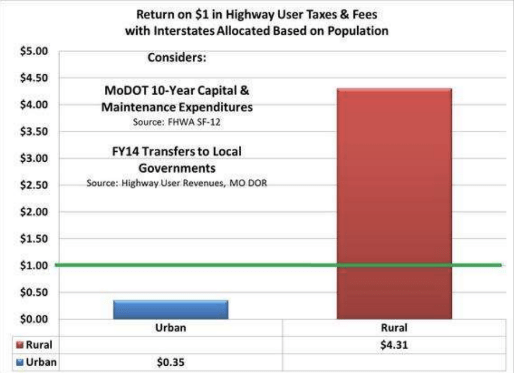 Distribution of funding is inequitable – Urban areas of Missouri generate about 84% of the fuel tax revenue yet receive only 20% of MoDOT transportation expenditures. Without creating a more fair state transportation funding formula, raising the fuel tax will increase Missouri’s urban and suburban residents’ burden.

Expansive rural roadway network – One explanation for the urban funding disparity is because Missouri is unique in that it maintains rural collector roads. In fact, 65% of the state’s 34,000 roadway miles are lightly traveled rural roads. In nearly every other state, these are maintained by counties or local road districts. Without addressing this issue raising the fuel tax will be little more than a band-aid.

Local streets not included – Local streets where Kansas Citians do much of their driving are maintained by local tax dollars, not fuel tax. Cities have nearly maxed out their local taxing capacity and are forced to choose between maintaining streets and funding other priorities like public safety and parks. This problem is compounded by the fact that cities in Missouri cannot legally increase local earnings tax or create local fuel taxes.

Funding is inflexible – Unlike federal fuel tax revenue, spending Missouri fuel tax on anything but highways and bridges is constitutionally prohibited. This means in urban areas where many rely on walking, biking, and public transit, communities are further disadvantaged.

No incentive for MoDOT to encourage less driving – Because MoDOT’s funding is directly tied to how much fuel people burn, there is no incentive for the transportation department to decrease vehicle miles traveled (VMT). This has a direct impact on safety (higher VMT correlates with greater traffic fatalities) and the environment.

Fuel tax increase is attached to a potentially devastating tax reform – Let’s also not ignore that SB 617 has been compared to the tax policy that ravaged the state budget for Kansas. Kansas was able to plug budget holes in education and healthcare by raiding… wait for it… transportation funding! Since that is unconstitutional in Missouri, this tax reform could be even more catastrophic than the version implemented in Kansas.

Although we are heartened that the 21st Century Missouri Transportation Task Force report has suggested revisiting how transportation funding is allocated, its recommendations fall far short of the fundamental shift in policy required to improve safety, equity, and economic vitality for the “Show-Me” state. While we agree that transportation is significantly underfunded in Missouri, there are fatal flaws in our statewide transportation policy that must be addressed before we can get behind a fuel tax increase.

Stay tuned as we explore this issue in greater detail and make recommendations for improving statewide transportation policy.