The Women Bike KC initiative is a product of women who want their sisters to feel confident, safe, and empowered to ride. It was launched in 2014 when BikeWalkKC hosted our very first Kansas City Women’s Bike Summit, and has grown into a year-round, multi-faceted effort to get more women and girls on bikes.

“We envision a Kansas City where girls and women feel CONFIDENT to ride their bikes, where there is a SUPPORTIVE AND INCLUSIVE NETWORK of women who ride, and where there are FACILITIES that are ACCESSIBLE TO EVERY RIDER.” — Women Bike KC brochure 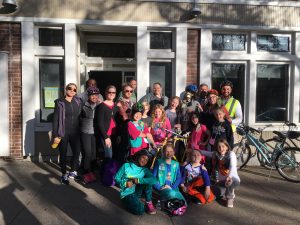 Expanding Our Reach in 2017

In 2017, Women Bike KC engaged over 250 women and girls through our programs and events, and nearly 350 women who encourage and support each other on our Women Bike KC Facebook page. Participants combined their workout favorites at Bike to Yoga and bike + fitness classes, acquired new skills with their Girl Scouts troops, and learned safe riding habits with Confident City Cycling classes and group rides. Women Bike KC also formed a new partnership with Amethyst Place, leading families to heal and bond over bicycles. 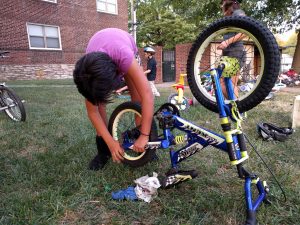 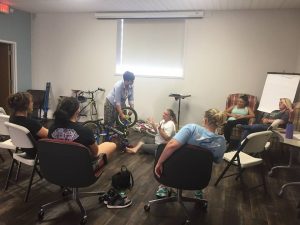 Historical links between women’s liberation and bicycles are well documented: Newspapers of the 1890s reported that “Woman is riding to suffrage on the bicycle.” And Susan B. Anthony famously declared that the bicycle “has done more to emancipate women than any one thing in the world.” The bicycle offered women freedom to move about in a world that had kept them indoors and under the watchful eye of chaperones. It was a catalyst for fashion reform, shortening skirts and inventing bifurcated bloomers that made cycling safer and more comfortable. It created an avenue for activity and fitness to women who had been barred from athletics. In more recent years, American women cyclists are uplifting Chicanxs riders in Los Angeles, women/trans/femme racers in Minnesota, and black cyclists nationally.

Women Bike KC is proud to continue this tradition.  For more information about how you can be a part of making Kansas City a safer and more fun place for women to ride, visit our Women Bike KC page, join the conversation on Facebook, and/or become a member of BikeWalkKC!