A crash course (minus the crashing!) in bicycle maintenance helped 4th and 5th graders at Green Springs Elementary in Olathe piece together a knowledge of bike mechanics they quickly put to good use. After seven weeks of after-school instruction, students helped repair eight previously owned bikes for donation to Mission Southside, an agency committed to serving low-income residents of Johnson County with volunteered goods and services. This was only made possible by dedication on the part of the students, the committed staff leads, and facilitators from BikeWalkKC’s Bike Club youth development program.

Bike Club typically spans eight to ten weeks, and employs a service learning approach to youth education. During this time, young people are empowered to take the lead on community improvement by discovering real-life infrastructure problems and mapping out solutions. The session at Green Springs was compressed to fit time constraints, proving to be a challenge that the students were ready to take head on. 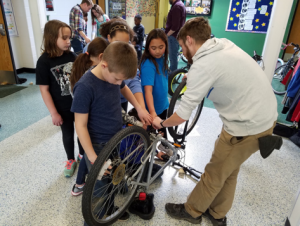 For the first few weeks they often gathered in the library, around several tables pushed together. A toolbox was opened up and one after another the contents were named, their uses committed to memory: spoke wrench; pedal wrench; hex wrench; cable cutter; tire lever; patch kit. On their own bikes they learned the parts and pieces of drivetrains and braking systems.

The diversity of backgrounds reflected in the classroom proved an asset: students who were familiar with bike mechanics were able to help those unfamiliar with cycling better understand fundamental principles; meanwhile individuals learned that working as a team means taking the time to make sure everyone is on the same page.

When instructors from BikeWalkKC brought in the donated bicycles, the team was ready.

On the warm days, they worked outside. In the grass they learned the ins and outs of changing tires, tightening brakes, and riding with a group in the loop around Blackbob Park. For several weeks they ran diagnostics, helped swap out cables, patch tubes, and tighten brake levers. When the rain came down in the later weeks of April, they spit-shined bottom brackets in the lobby outside the main office of the school (metaphorically of course; the frames were actually cleaned with Simple Green).

Week seven brought the end of the road. A lot of hard work had paid off, and Craig Howard, the executive director at Mission Southside came to personally thank the students.

“Everyone hits rough patches in life. Acts like this that can make all the difference in a neighbor’s world at a critical moment. Sometimes we take for granted being able to get around town, whether it’s to work, doctor’s appointments, or church, a bicycle can mean quite a bit to someone.” 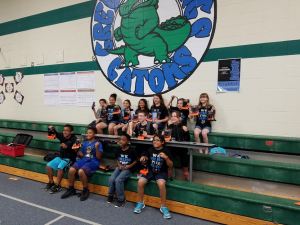 With the completion of their advocacy project, the students at Green Springs have learned more than bike mechanic skills. They’ve experienced camaraderie by riding together on the trails, and to and from school. They also learned to work as a team to get their project done. Most importantly they’ve earned a sense of pride in their work, and satisfaction that they have made a difference in the community. BikeWalkKC is proud of the students at Green Springs Elementary!

If you have an old or unused bike, please consider donating it to BikeWalkKC. Without donations our education programs would not be possible. To donate, please contact education@bikewalkkc.org or 816-205-7056.