A driver struck and killed Erika Smith while she attempted to cross Paseo to catch the bus on Tuesday morning. We don’t know all of the details of the crash and an investigation is surely underway. We want to express our condolences to Smith’s family and friends. The grief must be gut wrenching.

We also want to be clear about one thing: no traffic fatality is acceptable regardless of the circumstances. Smith’s was the 4th pedestrian fatality in KCMO so far in 2017. This is not okay.

A headline that writes off Smith’s death as a case of “distracted walking” is a dangerous red herring. Focusing only on Smith’s apparent “rush to catch the bus” ignores the possibility that driver behavior might have contributed to the crash.

And when city officials, journalists, and community leaders do not examine the broader community context surrounding these incidents we lose sight of the maxim that no traffic fatality is acceptable.
In all likelihood Erika Smith probably did rush into the street midblock to catch the bus. But she likely did so because the bus she was trying to catch, probably the 85, which runs once per hour, was about to leave. Imagine watching your only ride to work pulling away and the visceral response to the realization that you are about to be left stranded for an hour.

That street she was “rushing” across, Paseo Boulevard, resembles a highway more than an urban street. It is a wide four-lane thoroughfare with few traffic signals, begging drivers to mash the accelerator. At least one account of the incident indicates that the presence of four lanes was a contributing factor – a driver in the first lane stopped for Smith but another driver passing in the second lane struck with enough force to end her life. 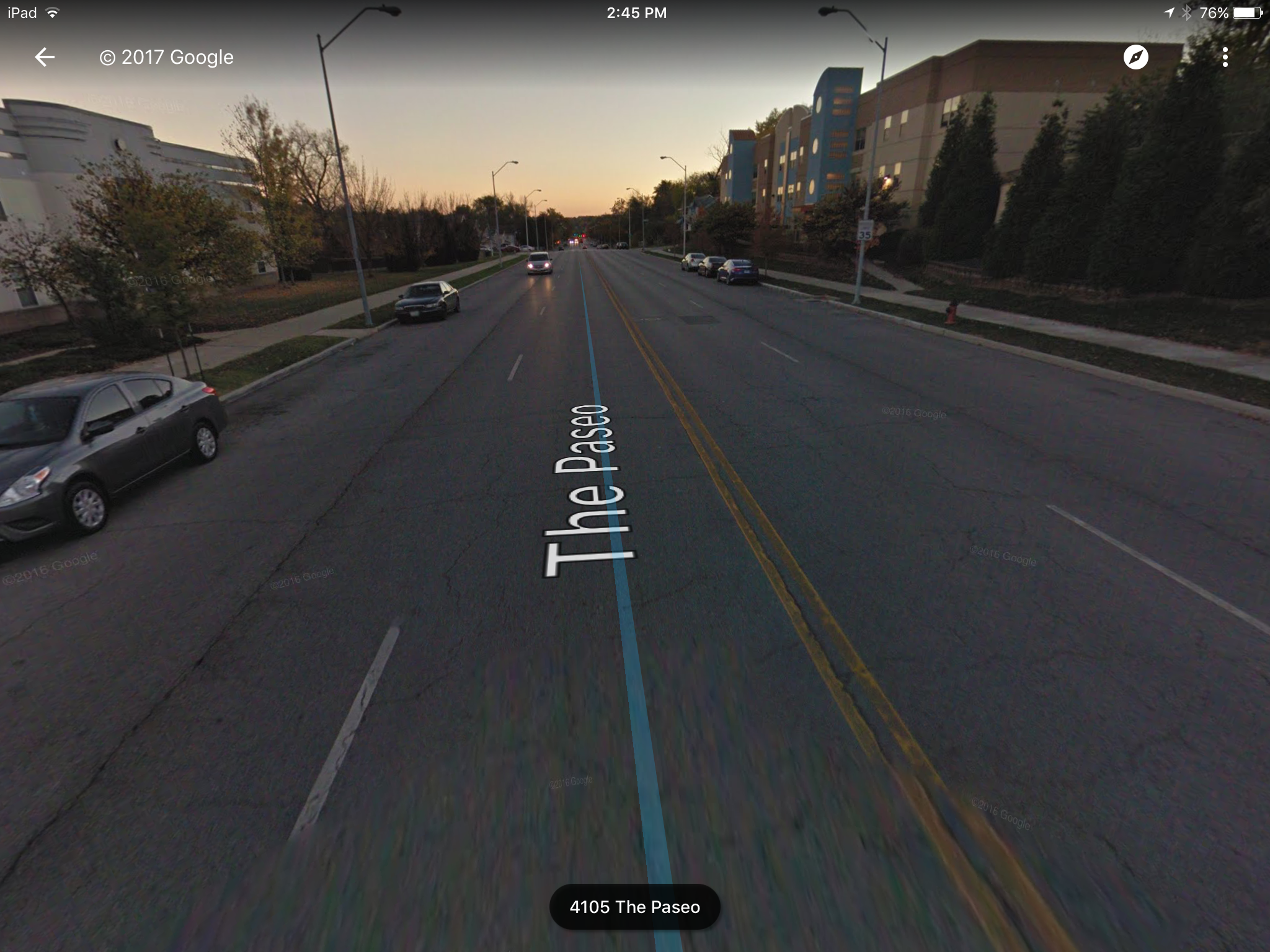 The approximate location of the crash – a wide, 4 lane street with no stoplights in sight.

Also, Smith’s nearest stoplight would have been 39th St.—nearly a three block one-way detour just to cross the street at a controlled intersection. There is a marked crosswalk at 45th – still a significant detour, and by the city’s own admission, wouldn’t have guaranteed significantly safer passage.

How all of these factors may have contributed to Erika Smith’s death are complex issues with no simple answers. But they are cultural challenges that must be unpacked if we are to get serious about preventing traffic fatalities.

But let’s start with the simplest solution first: the design of our streets must reflect our value of human life. There are numerous, proven countermeasures that would have lessened the severity of this crash or perhaps prevented it entirely. But with no clear policy objectives to guide transportation decisions, KCMO has been very slow to implement these.

The city is full of brilliant engineers, planners, and designers equipped with the tools and know-how to implement safer street design. But they need the leadership of policy makers to provide the direction to do so. Mayor James and the rest of City Council must step up and commit to eliminating traffic fatalities on our city streets. This starts with establishing clear policy objectives and putting funding toward implementation.

Let’s unleash the power and creativity of city staff and empower them to solve this problem.