Update, June 19, 2017: The study team has developed a Purpose & Need document to clearly identify the criteria by which any proposed alternatives will be judged. This is “living” document may be updated throughout the study as additional data, analysis, and public input is collected and completed. Click here to read the document and provide your input.

Mid-America Regional Council (MARC) has launched an effort, “Beyond the Loop,” to begin planning for the future of several large pieces of aging highway infrastructure around downtown KCMO and KCK.

There will be a kickoff event on February 23rd from 2:00 – 4:30 PM at the Central Library in downtown KCMO. RSVP here. 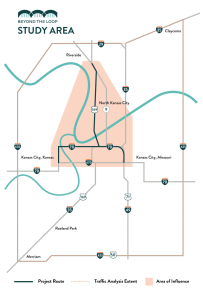 The study will propose several potential alternatives for the future of the Buck O’Neil (formerly the Broadway Bridge), the north leg of the Downtown KCMO freeway loop, and the elevated I-70 lanes into Downtown KCK.

Consultants for the project will likely evaluate the feasibility of tearing down the I-70 lanes between Columbus Park (KCMO) and Downtown KCK, setting Kansas City up to join the growing national trend of urban freeway removal.

Freeways once brought connectivity and convenient shipment of goods into urban centers and they made travel by car easier. But they also brought poor air quality noise pollution to densely populated areas. But even more, they proved to be extremely destructive to the communities they pass through, scarring historic neighborhoods and cutting off connectivity for residents.

If the complete removal of this section of I-70 proves to be feasible, the opportunities for catalytic, legacy projects abound.

RSVP to the event and make your voice heard!

Image: Beyond The Loop Study Area. Courtesy of MARC