The bell rings at 3:10, and by 3:15 Keith Schoen’s third floor English classroom at Alta Vista Charter High School is filled with the chatter of bilingual teenagers. Schoen is the staff sponsor of Bike Club, which has met for the last 8 weeks in this room. The club is part of BikeWalkKC’s Earn-a-Bike Program, a function of youth education aimed at building a culture of safe, confident cyclists among young people across the Kansas City Metro. 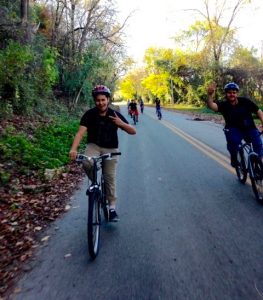 Earlier in the season students welcomed the unusual November sunshine with a visit to Kessler Park, where they tried out their newly refurbished bikes on the Cliff Drive Scenic Byway. For some of them this was the longest ride since they had made in years.

On this, their last day, students are preparing to ride their bikes to the promise of campfire and s’mores at Schoen’s home three miles away. An easy familiarity with new friends underlies the conversation as 10th, 11th, and 12th grade students sign the attendance sheet.

The ride is a celebration. With help from Schoen and BikeWalkKC instructors, students have learned basic bicycle mechanics, advocacy, and safety skills with weekly projects. Tonight, with the successful completion of the program, students will take home a bicycle they helped to repair.

The air is chill and traffic is light as students file northbound on side streets. Pedaling in a staggered step, those in the front of the pack point fingers down at potholes and piles of broken glass, a heads-up to riders in the back. There are one or two who dismount and walk uphill, but the class passes through intersections together. Everyone who gets off to rest eventually hops back on, and as the December sun begins to set, everyone makes it to the fireside.

Eight skewered marshmallows at a time jostle for space over the low flames, and the chatter now is filled with a tired excitement. 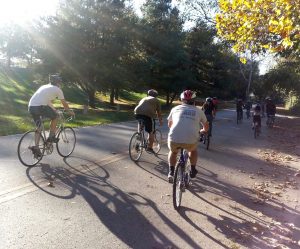 Jose, a sophomore at Alta Vista, rode in on what he says is his first road bike: a red Schwinn with white tape on the handlebars. The bicycle was one of hundreds of bikes donated to BikeWalkKC in the last year. Jose said he now feels capable of confidently riding in the streets around his house, and even in maintaining his new bike.

“These are skills I will definitely continue to use after this. I feel I know what I need to know to ride safe.”

AVHS Vice Principal, Devon Teran, noted students do not often ride their bicycles to school, citing distance and traffic. “We want that to change.”

Teran has echoed Schoen’s support for a spring session, perhaps with an additional grant writing component. Teran saw potential for a program where students could acquire and build a shelter for bikes on campus. “I think that would really encourage students to start coming to school on their bikes more often.”

Switching on the red lights fixed to their seatposts, students gather in front of Schoen’s home. They make last minute adjustments to helmets and jackets, shout thank-yous over their shoulders, and push off in groups of twos and threes. The blinking lights and laughter disappear down side streets, young people moving around Kansas City on their own. Whether or not the lessons are put to use is up to them, but it was obvious as young adults Bike Club’s appeal was not in the tools and skills practiced outside the school. For the students at AVHS, Bike Club offered an introduction to the basic mechanics of autonomy.

If you are interested in learning more about BikeWalkKC and our programming, visit BikeWalkKC.org, or contact the program coordinator: Maggie Priesmeyer, maggie.priesmeyer@bikewalkkc.org, 816-205-7056 ext. 7.