Last year Overland Park created one of the region’s most ambitious bike plans, and since then the city is moving rapidly to begin implementing the plan. We recently checked in with City Traffic Engineer Brian Shields for an update on the construction of on-street bike routes in Overland Park. 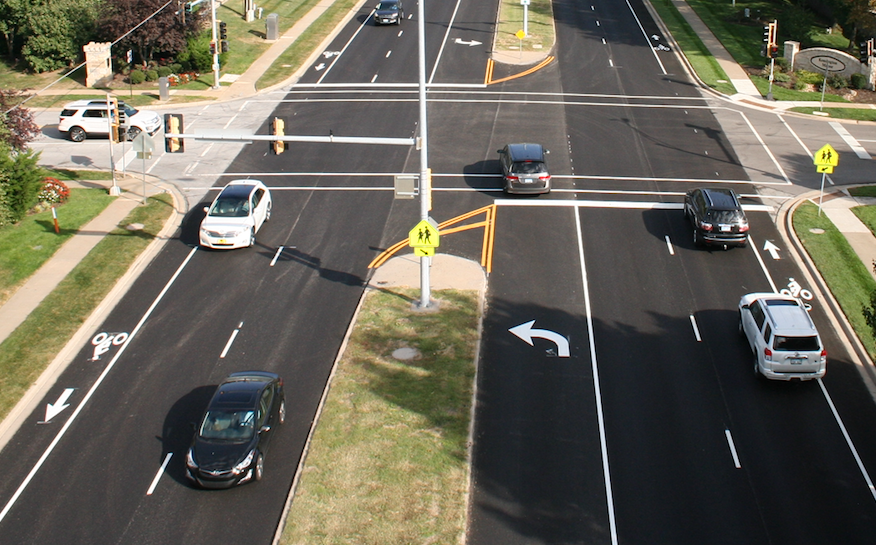 The big news is that Overland Park already has 10 miles of new bike lanes, plus another 8 miles of sharrows. The city is adding bike lanes as streets come due for their periodic repaving, which is cost-effective way to build bike lanes on existing streets.

As new bike routes come online the city is also counting bikes. This data is important for determining the use of the bikes lanes, gauging demand for future bike routes, and informing the decisions of policy makers and elected officials. City staff will report on bike count data to the City Council at the end of the year.

Another important way to build the bike network is to include bike lanes when streets are built or improved – building it right the first time is a very minimal cost on top of the rest of the street. Two projects staring in 2017 include:

Quivira Road between 151st and 159th, a calmer two-lane road with shoulders for bikes.

In 2017 the city will be recieving federal transportation funds to re-stripe streets and add 30 miles of bike lanes and sharrows in northern Overland Park.

If you live or work in Overland Park please be sure to let your City Council members know that you appreciate their investment in the bike network and look forward to seeing more progress in the years to come. While city has long had a great trail system, these are the first on-street bike lanes. It’s a new step for Overland Park, and city leaders need to hear from the public that it is appreciated.