Earlier this year we posted a couple of articles on the city’s progress toward policy that requires walkway access during construction. We are happy to report that KCMO City Council unanimously passed an ordinance that will include the changes we discussed in an earlier post (shown in its entirety below). So you know what to expect out of the new policy, the summary with major highlights is shown below along with a link to the actual code language.

We wanted to give a huge THANK YOU to KCMO Public Works Department for doing all of the leg work on the technical details of the new policy. Thanks to BPAC and neighborhood advocates who pushed for the new policy. And thanks to the council folks who have championed this needed policy change all along particularly 3rd district at-large Councilman Quinton Lucas, and 4th district Councilwoman Jolie Justus.

Below is an earlier piece that originally ran on April 22nd of this year.

A few weeks ago, we reported on the need for tighter regulation of sidewalk closures in KCMO. You can read that piece here.

Just a few days later, the KCMO Bicycle and Pedestrian Advisory Committee heard proposed changes to the city’s ordinance on temporary traffic control. The update would significantly restrict contractors and utilities from blocking sidewalks and will go a long way toward maintaining walkway accessibility during construction. 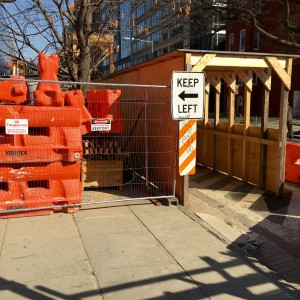 Example of a covered temporary walkway

Here are the major highlights:

The proposed changes will be reviewed by the city’s public works standards review committee in May and go on to city council for adoption this summer.

The committee will also consider adopting some major updates to the city’s curb ramp standards.  This change would bring city curb ramp design standards in line with those of PROWAG – the highest level of sidewalk accessibility guidelines.

We have to give a lot of credit to the Public Works Department for listening to citizen concerns on these matters and moving quickly to respond with thoughtful policy changes.

Take a moment to 1) thank the city for this but 2) urge the public works department to move ahead with adoption of these two critical updates by emailing sean.demory@kcmo.org. And stay tuned for any further calls to action as this progresses toward full adoption.