High construction bids present one more challenge for the centerpiece of the city’s future bike network, but also an opportunity to try new strategies for picking up the pace of bike/ped progress in Kansas City. 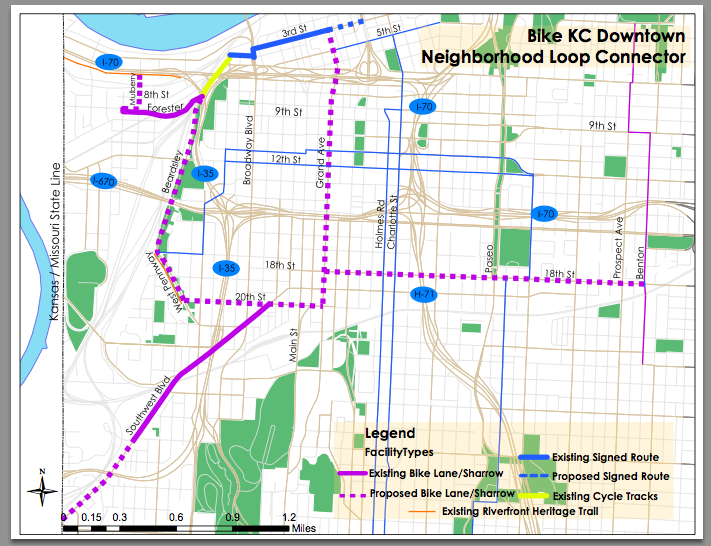 The much anticipated and long delayed Downtown bike network suffered yet another setback last month when construction bids were opened and only one contractor bid for the work – and at 30% over the available funding. Originally planned for implementation later in 2016, the vision for 13 miles of bike lanes connecting the Westside and Jazz District to a spine of buffered bike lanes on Grand Boulevard is in doubt again as city officials now go back and look for ways to cut costs and/or make the project more appealing to the contractors who would construct it.

The idea of the Downtown bike network came about in 2012 as a way for the city implement a big part of the Greater Downtown Area Plan, which calls for many new bike routes and the use of road diets to retrofit existing streets. It was an important part of the public component of Kansas City B-cycle, BikeWalkKC’s public/private/nonprofit bike share program. Finally, it is a high priority for local residents and the Downtown Neighborhood Association. The city pursued federal funding and succeeded in getting a grant to cover 80% of the costs.

Unfortunately the project has experienced several challenges with project management, community engagement, and opposition from a small number of big businesses. The bike network received federal funding at the same time as the KC Streetcar starter line. Over the next two years the city was able to build a $100 million rail system on time and under budget, but struggled to even bid out a $1 million project to put paint and signs on existing streets.

The city’s Parking and Transportation Commission recently discussed the idea of doing the work internally with existing city resources, but the Public Works department explained that they don’t currently have the necessary equipment. Instead, they rely on private contractors. Even if the city could do this project in-house, the federal funding requires they use outside contractors. 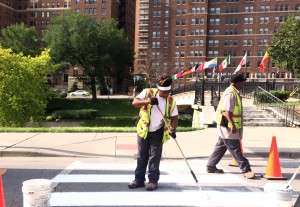 BikeWalkKC recently met with City Manager Troy Schulte and other city officials. We had a good discussion about the challenges and opportunities for speeding up the pace of bike/ped improvements. One strategy we recommended to the city was in-sourcing the work of retrofitting existing streets with road diets and bike lanes. Cities like Seattle are building lots of bikes lanes and doing it very cheaply by using city crews instead of private contractors.

We suggested the city utilize its awesome new crosswalk marking crew to begin re-striping streets with bike lanes. It would require a capital investment in new equipment, but that investment could be returned many times over if the city can be more cost-effective and more responsive to community needs. This latest setback could be an opportunity to try a new approach to building bike lanes in Kansas City.