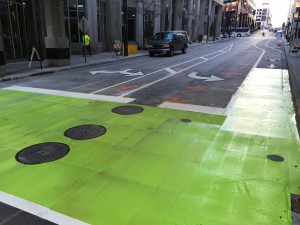 It appears that Kansas City, Missouri has won the race to install the region’s first bike box. With minimal fanfare outside of some nerding-out on social media, crews quietly slapped down green paint and bike stencils at the intersection of 11th and Main. While KCMO has used green paint in the past, this is the first time a city in the metro has used it for the purpose of marking an on-street bike lane. The first example of green pavement was at an intersection of  an I-70 offramp along the Riverfront Heritage Trail in the West Bottoms.

While this may seem like a minor victory, it marks a sea change in the city’s approach to bicycle facilities. We are encouraged that the KCMO Public Works Department is beginning to use state-of-the-art facilities like bike boxes and green paint. The city is finally becoming the regional leader in bikeway design.

But, there is still much work to do in order to reach Platinum Bike Friendly status. Now it’s time to fill in the gaps and create a complete network of bikeways.

Will KCMO be the first city in the region to install a protected bike lane?