Monday evening the Overland Park City Council gave final approval to the city’s first bicycle master plan, and with it the first on-street bike lanes are coming to the city later this year.

BikeWalkKC Safe Routes to School Planner Joe Blankenship was on KMBC-TV yesterday talked about the details of the plan and its importance for the region.

“Overland Park is the second-biggest city in our region, and it’s saying to the Kansas City region that bicycles matter,” said Blankenship. 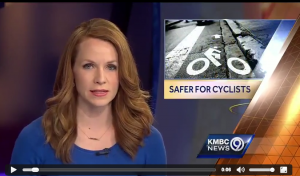