Prospect Avenue has been identified as a “Corridor of Concern” for pedestrian injuries and fatalities. On Friday, March 27th BikeWalkKC will join local, state, and federal partners in a safety assessment of the corridor, one of 50 assessments being conducted nation-wide as part of  US Transportation Secretary Anthony Foxx’s Safer People Safer Streets initiative.

KANSAS CITY, MO – In September 2014, Secretary of the United States Department of Transportation Anthony Foxx launched Safer People, Safer Streets with the goal of reducing the growing number of pedestrian and bicycle injuries and fatalities across the United States. As part of the 18-month initiative, all 50 States will conduct road safety assessments spearheaded by various DOT modes.

Approximately 45 persons from neighborhoods, special interest organizations, Local, State and Federal agencies will gather on March 27, 2015 to conduct the Missouri Pedestrian/Bicycle/Transit Safety Assessment on the Prospect Avenue Corridor from 22nd St. to 39th St. in Kansas City.  Teams of walkers, bicycle riders and public transit users will perform a safety assessment. The three teams (about 15 individuals on each) will conduct on-site assessments (on foot, and on bicycles) noting safety and mobility issues for pedestrians, transit users, and bicyclists and to identify potentially dangerous safety gaps within the Prospect Avenue Corridor. Each team will have a checklist from which they will conduct their assessment. The corridor being assessed has been identified as a “Corridor of Concern” by the Mid-America Regional Council due to the high number of pedestrian crashes there. 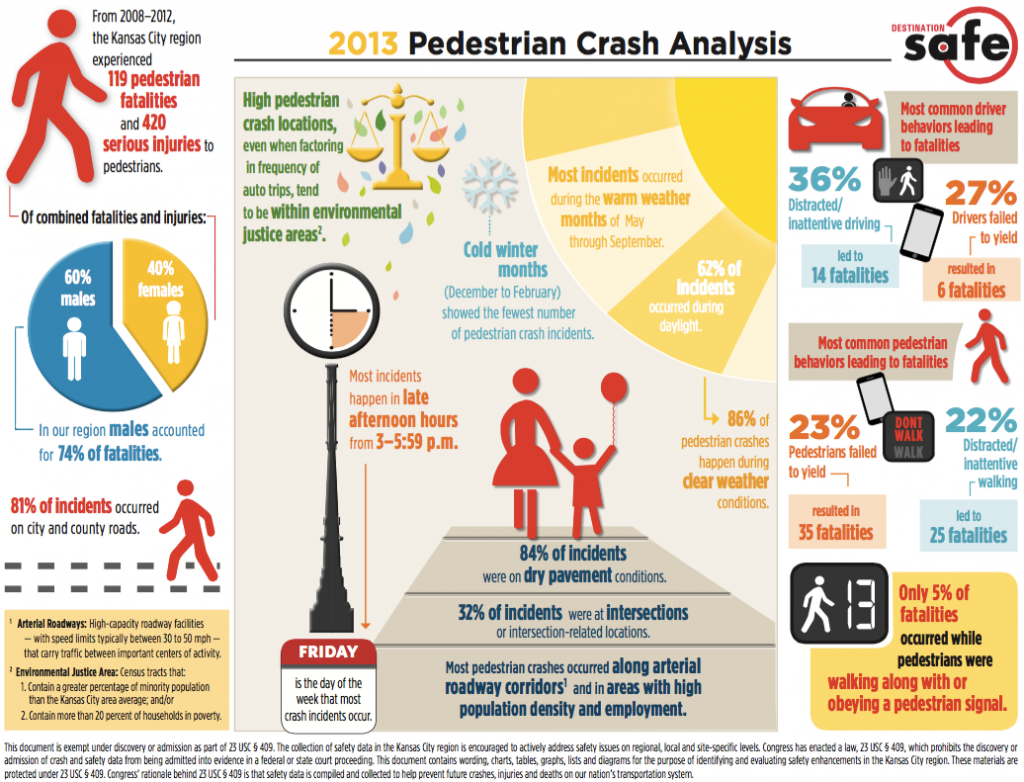 Following the assessment, the groups will reconvene to discuss findings that will be compiled and presented in a report to US DOT Secretary Foxx, the City of Kansas City, Missouri and to the KCATA.

WHO:             Representatives from fifteen local, State and Federal organizations
WHAT:          Missouri (Kansas City) Pedestrian, Bicycle and Transit Safety Assessment
WHEN:          Friday March 27, 2015
WHY:             To reverse the recent nationwide increase in pedestrian and bicyclist fatalities and injuries from traffic accidents

To identify the safety challenges faced by non-motorized travelers

To provide engineers, planners and other partners with tools and innovative strategies to create safer people and safer streets

Pedestrian/Bicycle Fatalities on the Rise
Nationally, fatalities and injuries among pedestrians and bicyclists are on the rise even as fatalities and injuries among all transportation users are declining. In 2012, 4743 pedestrians and 726 cyclists were killed in collisions with motor vehicles, — more than a 15% increase from 2009.  Pedestrians represent 14% of all people killed in motor-vehicle crashes.

Area Statistics
There were 1,088 pedestrian-motor vehicle crashes in the City of Kansas City between 2009 and 2013, which represent 1.3 percent of all crashes during that period. Pedestrian-motor vehicle crashes tend to be more severe than other crashes – despite representing only 1.3% of all crashes they comprise 19% of all fatalities and 9% of all injuries in the city.