Last Friday evening a bicyclist was killed trying to cross Southwest Trafficway on 38th St in Midtown. We still only know that he was traveling eastbound and was run over by a northbound pickup truck. Early reports indicated that he may have hit the concrete median or lost his balance before falling into the path of the truck.

Then again last night, a teenager was struck while trying to bike across Highway 40 in Grain Valley. That person is in critical condition. 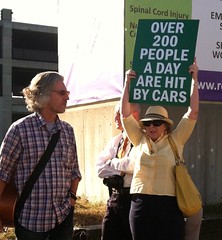 The details of what transpired in both cases are important because personal responsibility, particularly that of drivers in cases such as these, is critical to ensuring safety for all street users. But it is our built environment that should be most heavily scrutinized.

No matter who was legally at fault in this crash, what deserves the brunt of the blame is the culture that values car traffic efficiency over the safety of human lives.

The bottom line is that a minor miscalculation on the part of a bicyclist or a pedestrian should never result in a fatal incident on a city street. We build urban arterial streets to be forgiving of errant driver behavior — wide lanes, straight lines, gentle turning radii, clear zones — which nearly always is at the expense of bicycle and pedestrian safety. Isn’t it time we flip that paradigm? Shouldn’t we build streets that put the safety of all users first?

We don’t know exactly what happened in either situation, and we may never. However, we do know that an expressway that divides an urban neighborhood reserves minimal regard for those wishing to cross it. A frontage road that rips through a community is a barrier to our children’s independence. We must do better.

We can work to change the built environment by adopting and implementing complete streets policies. When designed well, streets can connect communities, provide transportation options, build a strong local economy, and create a sense of place — all while making streets safer for all who use them.

Our heartfelt condolences go out to the family of the cyclist who tragically lost his life on Friday. We extend our well wishes the the injured teen in Grain Valley. Although we do not yet know the names of either victims, they are a part of our community and both deserve better from us.