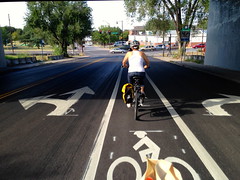 KCMO has a plan for 12 miles of new bike lanes linking the various neighborhoods of Downtown – River Market, Loop, Crossroads, Westside, 18th & Vine, and Crown Center. The centerpiece is a transformation of Grand Boulevard into a transit and bike corridor with buffered bike lanes, enhanced “super stops” for public transit, and a consolidation of north/south bus routes. The addition of a center turn lane would also improve traffic flow and reduce congestion for motorists.

ACT NOW by adding the November 25th open house to your calendar. Your voice is needed to show decision makers that there is strong support for finally implementing a comprehensive bike network for Downtown Kansas City.

Planning to ride Trip the Light Fantastic at Christmas in the Park? Stop by the public meeting on your way to Longview Lake!

What Is a Buffered Bike Lane?
Buffered bike lanes use an extra area of painted pavement between the bike lane and car lanes, to provide additional visual and spatial separation between the two modes. The image below depicts the general configuration that the City has planned for Grand Boulevard.