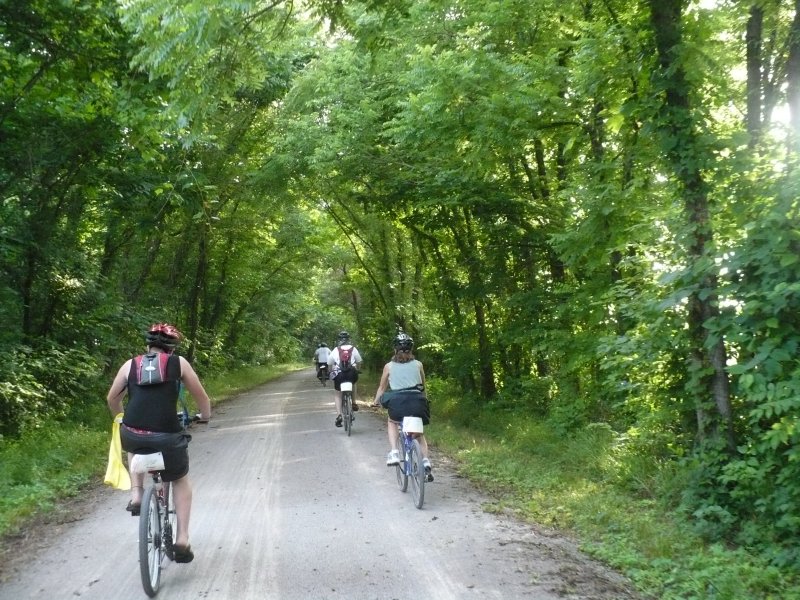 One of the most exciting developments for cycling in the KC area came recently, when Jackson County Executive Mike Sanders announced the county was moving forward with a plan to extend the Katy Trail into Kansas City, Mo. On August 11, Sanders said Jackson County had struck a deal with Union Pacific Railroad to acquire part of the abandoned right-of-way of the former Rock Island Railroad. The old railroad route would be used, in part, to “complete” the Katy Trail, bringing it from near its current terminus to the Truman Sports Complex, 25 miles north. (Within the right-of-way there would also be room to safely fit track for a new commuter rail line.)

The Katy Trail is already the longest of some 200 US “rail-trails,” recreational trails created from abandoned railroad right-of-ways. The Trail currently runs for 237 miles from St. Charles, just outside of St. Louis, to Clinton, Mo., along the right-of-way of the former Missouri-Kansas-Texas (MKT or “Katy”) railroad. The trail is being extended right now from Windsor north to Pleasant Hill. When the last segment to Kansas City, area cyclists will be able to ride the trail from KCMO all the way to suburban St. Louis.

But the announcement of the Katy’s extension is not just great news for cyclists, it’s also a big deal for region’s residents at large. “If you look at small towns along the trail, they were once ghost towns. Because of the Katy Trail, those towns are thriving,” said BikeWalkKC Executive Director Eric Rogers on an interview with KCUR. A 2012 study by Missouri State Parks showed the trail attracts 400,000 users and over $18 million in economic activity annually, including $10 million in direct spending on and around the trail.

The Katy Trail’s success is not unique. Studies from virtually every American state have consistently shown net economic benefits in the millions of dollars from individuals trails and in the tens of millions from bicycle recreation in each state as a whole. Trails bring visitors who spend well on dining, lodging, bike repair or rental, souvenirs and more — supporting new and existing businesses in communities along the trail. Recreational trails like the Katy have also been shown to bring significant jumps in property values for homes and other real estate located trailside and millions of dollars in healthcare savings to adjacent communities.
The coming extension of the Katy Trail is exciting news for communities in the KC Metro. This is not only the first time the trail will connect the two sides of the state, it’s the first time the Katy will be brought directly into a major city. This promises to significantly increase the number of visitors to the trail as a whole and to bring a new kinds of development opportunities to our region. If properly harnessed, the expansion of the trail could bring tens of millions of trail-oriented development, tourism, and health and transportation benefits over the next few years, just as urban trails have done recently in places from Pittsburgh and Washington, D.C. to Austin and Atlanta.
And things are already moving fast. Sanders says funding to purchase the railroad right-of-way is almost lined up — with an important announcement about that coming in October — and the sale of the land could go through shortly thereafter.

Posted in News and tagged news.