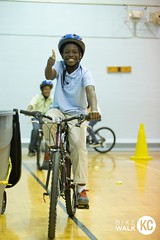 Area students can gain confidence, traffic safety skills, and the tools to stay fit through the BLAST bicycle education program. The course, developed and evaluated by educators from local organization BikeWalkKC and reviewed by parents, has given thousands of local kids the ability to improve their lives and the state of their community through better health and knowledge of traffic laws and bicycle safety.

“BLAST is a perfect fit for a school’s PE lesson plan or for a community center or youth group’s activity program”
-Maggie Priesmeyer, Education and Outreach Coordinator for BikeWalkKC.

The program is split into four sessions that totals about three hours of class time and is taught by BikeWalkKC’s trained instructors, assisted by a school’s PE teachers. Each course includes classroom instruction, followed by bicycling practice in a controlled environment.

The idea is to help youth gain confidence as cyclists that they’ll be able to use later as safe road users.

“Both cyclists (children and adults) and drivers are unaware of the laws and conventions that govern cycling on public byways,” says Priesmeyer. “We’re hoping to teach kids basic safety and traffic rules early on so eventually they’ll be safer road users.” 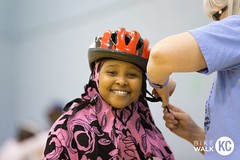 Priesmeyer adds that by teaching effective bicycling, BLAST also gives students the ability to take control of their fitness and health.

“There are a couple of statistics we like to quote when putting the US’s public health crisis into relatable terms: ‘Today fewer than 15% of kids walk or bike to school compared to 50% in 1969, and today’s kids are the first generation of Americans with a shorter life expectancy than their parents.”

Additionally, by encouraging students to bike to school through BLAST, school districts like Kansas City Public Schools can save thousands of dollars annually.

This semester, 90 fifth and sixth graders at Whittier Elementary School in the Northeast are participating in the BLAST program.

Students and teachers at Whittier have been impressed. Even the principal, Luis Hinjosa, has been seen riding a bike at school during the BLAST program.

“This has been a wonderful opportunity for our students, many of whom learn to bike simply by hanging around older kids,” says Bernie Fitzpatrick, Physical Education, Whittier Elementary. “They have no prior experience with safety or laws regarding proper use of a bike. In these few times they have met I have seen non-riders become confident and experienced riders learn proper safety and etiquette. The instructors are great with the kids and are confident with what they teach. Great program!” 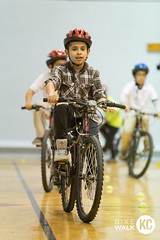 BikeWalkKC anticipates that providing bicycle safety lessons like BLAST will also help to influence infrastructure improvements around the school that make biking and walking easier, such as installing a bike rack.

“We’re hoping to create an educational culture that values cycling as a form of transportation and a basic life skill,” says Priesmeyer.

See the BLAST program in action this summer for fourth, fifth and sixth graders at Garfield Elementary summer school.

For more information about BLAST and how to bring it to you, visit: http://www.bikewalkkc.org/saferoutes/blast.

About BikeWalkKC
BikeWalkKC is the unified voice for active living, promoting a healthy, safe and accessible outdoor experience for all in a vibrant, engaged community. BikeWalkKC is a member-supported organization that works to make Greater Kansas City a safer and more accessible place to walk, bicycle, live, work, and play. The advocacy programs work with local cities to improve policies and build sidewalks, trails, crosswalks, bike lanes, and more. BikeWalkKC’s education programs give people the knowledge and skills to walk and to bicycle safely and confidently for transportation, recreation, and fitness. Learn more at BikeWalkKC.org.