A big crowd of 50 or so people turned out last night to meet with consultants from George Butler Associates and share concerns about traffic and parknig along Armour Boulevard in Midtown. The City's Public Works Department has hired GBA to study the corridor and made suggesitons for future improvements.

Some of the common concerns expressed by neighborhood residents include: 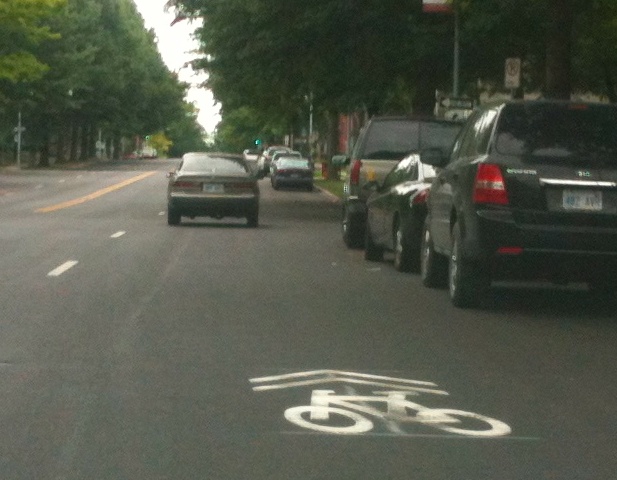 About the study
The traffic and parking study is funded by the City Councilmembers Jan Marcason and Jim Glover in response to concerns of residents in the Hyde Park neighborhood. MAC Properties is renovating many of the historic apartment buildings along Armour Boulevard and converting them from Section 8 to market rate. This has led to an increase households with cars in these historic buildings that have limited off-street parking.

The study will last for three or four months. If you missed the Hyde Park meeting, there will be other public meetinsg for everyone to learn about the process and share their concerns and ideas. Stay tuned for the dates of future public meetings.

Bike facilities on Armour
In late 2010 the Parks Department tested KCMO's first sharrows on Armour Boulevard. These shared lane markings are used indicate designated bike routes when there is not enough space, support, or demand for dedicated bike lanes. The sharrows were well received and are now used in several places around the city.

If a road diet is implemented on Armour BikeWalkKC believes it woudl be a great opportunity to upgrade the sharrows to a dedicated bike facility. By repurposing some of the space the road could accommodate full bike lanes or even a cycletrack that uses a barrier to separate bikes from automobiles.

KSHB-TV 41 was at the meeting and broadcast this report: