A new Bicycle Master Plan for Kansas City, MO is currently sitting at City Hall waiting for a second hearing and final adoption at City Council. It's an ambitious yet pragmatic plan to connect all parts of the city with a network of cross-town protected bike lanes and local safe routes.

Updated January 20th, 2020
The bike plan has been put back on the docket for the Transportation Committee. We expect it will come up for a City Council hearing and debate sometime in the next few weeks. Stay tuned to our Advocacy mailing list for action alerts and opportunities to come out and support the plan

Share your story and help us demonstrate why we need safer streets for everyone.

See all posts about the bike plan

Kansas City, Missouri's new Bike Master Plan will transform how we navigate our city. With over 135 miles of bikeways prioritized for design and construction over the next five years, this plan lays out a bold directive to establish real connectivity for bicyclists in Kansas City.

UMKC study says bike plan will save lives and boost the economy
A new economic impact analysis of the new bike master plan shows that fully building the bike network will save 36 lives per year, reduce carbon emissions 200,00o tons per year, and add $500 million to the local economy by 2050. Read more. 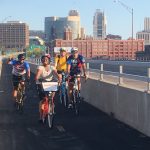 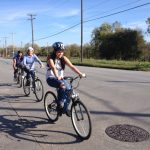 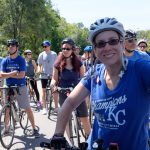 In early February 2017 a performance audit of the city's bike program spurred City Hall to reboot the 2001 bike plan, and that process is now working towards an April 2019 completion. Public meetings were held Spring 2017, and planners continued to gather public input through the summer and fall. The first draft of the plan was submitted to the steering committee in the fall of 2018, and public meetings were held in February 2019.

A high quality bike plan with measurable outcomes is a critical priority for us in 2019. We have two staff members on the Steering Committee overseeing the planning process, Policy Director Eric Bunch and Executive Director Eric Rogers. Bunch and Community Planning Manager Thomas Morefield also serve on the Technical Committee responsible for many of the details about what types of bike lanes will go where. Finally, Eric Bunch is the mayor's appointee to chair the city's Bicycle & Pedestrian Advisory Committee, which also has an important role overseeing the implementation of the final plan.

Bicycle Demand Analysis. BikeWalkKC recently produced a detailed technical GIS report showing where there is the most latent demand for bike lanes and other infrastructure. In late 2016 we presented the report in person to the City Manager and staff from the Public Works Department. This analysis was a significant investment of BikeWalkKC's time and resources at no cost to City Hall, further demonstrating our commitment to ensuring we get the best bike plan possible.